The King of Bollywood Shah Rukh Khan celebrates his birthday, which is nothing less than a festival for his infinite fans across the globe. The superstar turned 55 today (November 2). However, due to the pandemic, Shah Rukh's fans celebrated his birthday virtually. The actor himself is in Dubai for the ongoing IPL season. Since last evening, fans and admirers are showering love on Shah Rukh on social media. Making the day even special, Shah Rukh's daughter Suhana Khan shared a throwback picture on Instagram and relived the good old days when one could party without hassles.

Suhana, on her Instagram stories, shared a picture with her father Shah Rukh and her best friend Shanaya Kapoor who celebrates her 21st birthday today. She wrote, "Happy Birthday to my best friends lol". She added, "55 and 21 hehe". The picture was clicked last year at Shah Rukh's Alibaug bungalow. 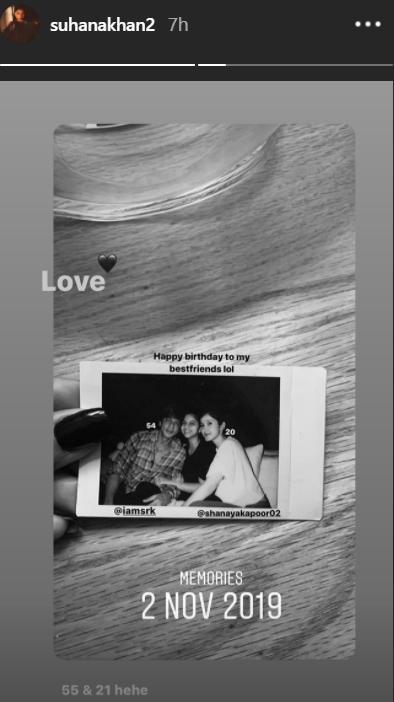 Recommended Read: There’s only one religion in the world, hard work!- 20 times when birthday star Shah Rukh Khan gave us life lessons to live by!

Shanaya, daughter of actor Sanjay Kapoor and his wife Maheep Kapoor, is Suhana's childhood friend. Their girl-gang includes actress Ananya Panday. Shanaya stepped into Bollywood as an assistant director on her cousin Janhvi Kapoor's film Gunjan Saxena: The Kargil Girl. The buzz is strong that she is gearing up for her acting debut. Suhana reportedly aspires to become an actress.

Speaking of Shah Rukh, his fans and the fan club named SRK Universe planned to celebrate their idol's birthday virtually.