Advertisement
HomeBOLLYWOODENTERTAINMENT NEWSArun Jaitley passes away at 66: Ajay Devgn, Anil Kapoor, Karan Johar and other celebs mourn the death of the national leader

Arun Jaitley passes away at 66: Ajay Devgn, Anil Kapoor, Karan Johar and other celebs mourn the death of the national leader

He had been admitted to the All India Institute of Medical Sciences (AIIMS) on August 9 after he complained of breathlessness. His condition steadily deteriorated, and he was put on life support. The Bharatiya Janata Party (BJP) stalwart underwent dialysis on Thursday. Here's what the celebrities tweeted:

#RIPArunJaitley ... the nation mourns a strong and assured leader today....thoughts and prayers with his family and loved ones....

RECOMMENDED READ:  I wish you were here everyday, writes Priyanka Chopra Jonas as she wishes her late father Ashok Chopra on his birthday

Deeply saddened by Arun Jaitleyji’s demise. Admired his dynamic vision for India; he was a leader I'm happy to have interacted with. My thoughts are with his family in their hour of grief. RIP Arunji

Deeply saddened by the sad demise of Arun Jaitley ji.
A dynamic leader, a thorough gentleman and our former Finance Minister. Very kindly, he had come over to meet me and we spoke for a long time. Will cherish those memories. Heartfelt condolences to the family. pic.twitter.com/DIhrkgnKms

Met Shri #ArunJaitley Ji almost 20 years back for the first time & have been his admirer ever since.
His demise is a huge loss for our nation.
Will be truly missed.
My heartfelt condolences to the family. pic.twitter.com/XsBXwQnpj0

#ripArunJaitley thank u for everything u will be missed sir. Condolences to the family

Rest in peace #ArunJaitley. Your demise has left a void in the country. My prayers are with the family and loved ones.

Deeply saddened by the passing away of Shri #ArunJaitley ji... deepest condolences to the family & loved ones. pic.twitter.com/hhxcbj9C03

Deeply saddened and shocked to hear the demise of #ArunJaitley sir. We have lost one of the prominent leaders today. My prayers are with his family and loved ones.

#RIPArunJaitley .. deeply saddened to hear of the passing of the respected parliamentarian & lawyer .. prayers with the family

Saddened to learn the news of Arun Jaitley ji’s passing away. He was a very kind soul.
Rest in Peace. #ArunJaitley

Deepest condolences and heartfelt grief on the passing of Arun Jaitley ji. Never had the opportunity to meet him but always felt great fortune in sharing the same college as him. His contributions and remarkable legacy remain exemplary for generations to come. #RIPArunJaitley

Always a winner. And humble.
This photo after his victory in DU elections. #ArunJaitley pic.twitter.com/COaO4EJfwZ

Very sorry to hear about Mr. Arun Jaitley. Condolences to his family.

Saddened to hear about #ArunJaitley .
Always looked up to him for his eloquence. And the manner in which he articulated his point of view and his mastery of all things legal.
A loss for the country. May the Almighty give his family strength to bear this untimely loss

Yes Sir, and also a warm wonderful human being. Used to say hello to him often on his morning walks at Lodhi Gardens @narendramodi #RIPArunJaitley OmShanti https://t.co/OsjWUZzmc4

Shocked and saddened to hear of the passing away of #shriarunjaitley ji. May god give strength to his family to bear the irreplaceable loss. A good man gone too soon.

Deeply saddened to hear about the demise of #ArunJaitley ji. This is a great loss to the BJP and India. He was one of the stalwart and charismatic leader. My heartfelt condolences to his family & friends. #OmShanti

Such a huge loss to our nation... his brilliance will always be remembered #RIPArunJaitely sir ... condolences to family. #GoneTooSoon https://t.co/jbkNXzXNKi

In a brief statement, the hospital said Arun Jaitley died at 12.07 pm. "It is with profound grief that we inform about the sad demise of Shri Arun Jaitley... Shri Arun Jaitley was admitted in AIIMS, New Delhi on 09/08/2019 and was treated by a multidisciplinary team of senior doctors," said AIIMS in a statement. 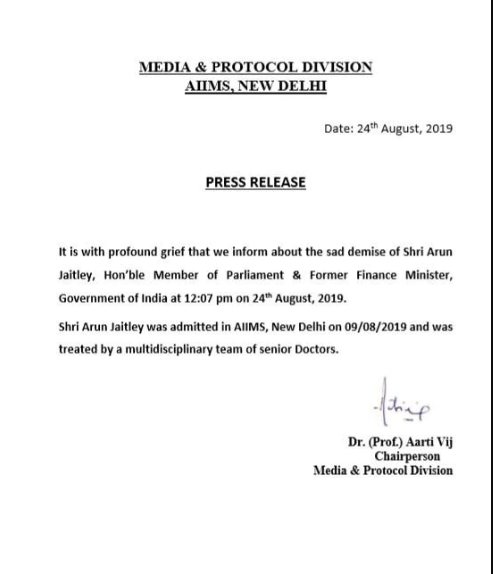