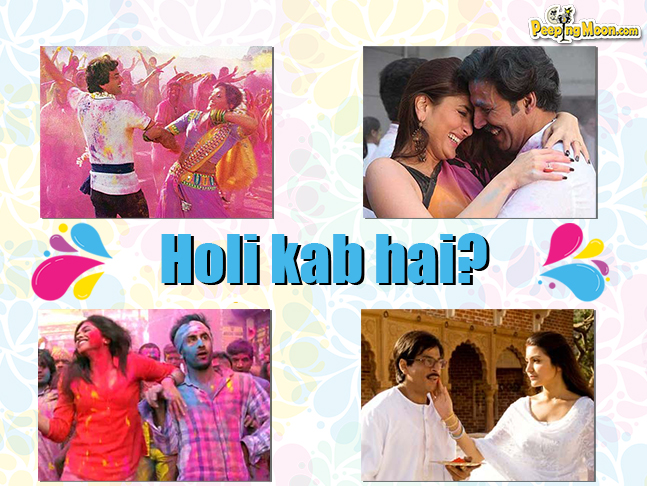 Holi has played an important role in our Bollywood films. Most iconic songs that we have treasured over these years, majorly revolve around the festival. This Holi, let's go down the memory lane and revisit some of these intense, funny, romantic, horrifying, moments from our Hindi films that happen during the festival of colours.

PeepingMoon.com presents to you some of the best Holi moments in Bollywood that were the turning points in several films.

Sholay is a bona fide iconic film in the history of Indian cinema. Sholay did complete justice to the festival of Holi and made the celebration a turning point in the film. During the Holi sequence, as everyone in Ramgarh is busy dancing, Gabbar finds his way into the village and what follows is a well-known fact.

Yeh Jawaani Hai Deewani gave us major life goals and became a film that brought out the real millennial feelings on the reel. The iconic song Balam Pichkari ain't just a song but brought a major change to the plot. After matching steps to the song during the Holi celebrations, Naina begins to develop feelings for Bunny but little did she know that she would have to part ways with him as he receives a letter from an international university for further studies.

The song Teri Meri Kahani from Gabbar Is Back is used to provide flashback to Akshay Kumar's character. The song shows his character Aditya Singh Rajput as a happily married man whose life turns topsy-turvy during the festival of Holi. At the end of the song, Aditya's wife played by Kareena falls prey to weak building construction as the structure collapses and puts an end to his happiness. A tragedy, so grave, transformed a simple professor to a person who is feared by the social evildoers.

A still from Gabbar Is Back[/caption]

Rab Ne Bana Di Jodi was a gift to Indian cinema. With the powerhouse of talent Anushka Sharma making her debut opposite Shah Rukh Khan, the film gave us many reasons to cherish the simplicity of the film. Are you wondering how was Holi celebrated in this film? Let us tell you that in the song Haule Haule, Anushka as Taani smears a bit of colour on Shah Rukh's Surinder. This is the only act of intimacy shared between the two characters as Anushka gets married to Shah Rukh after her fiance is killed and for her, the marriage is a compromise. However, as she says in the film that she will fulfill all her wifely duties except for giving love to her husband, this endearing touch even though it's minuscule holds a great deal of importance in the film, especially for SRK's character who is deeply in love with his wife.

Goliyon Ki Raas Leela Ram-Leela was a pioneer in many aspects. Firstly, it introduced us to DeepVeer that is Deepika Padukone and Ranveer Singh. Secondly, Deepika and Ranveer worked with Sanjay Leela Bhansali for the first time. Thirdly, ...Ram-Leela showcased a different side of Holi altogether. Bhansali aesthetically presented the playful side of the festival and how. As Deepika gracefully ran down a few steps in her beautiful yellow lehenga honestly made us envy her beauty and Ranveer doesn't deny it in the song Lahu Muh Lag Gaya, does he? If this Holi sequence in the film wouldn't have existed, the story would have remained incomplete as the sequence shows the characters falling in love for the first time *in real life too*.

Darr established Shah Rukh Khan as the most convincing antagonist. With Darr, Yash Chopra told the nation that Holi isn't all about spreading the love. In Darr, the focus remained on the anti-hero and developed the fear of something undesirable is going to happen soon. As Kiran (Juhi Chawla), Sunil (Sunny Deol), Vijay (Anupam Kher) and Poonam (Tanvi Azmi) are busy dancing to the song Ang Se Ang Lagana, Rahul (Shah Rukh Khan) enters the festival premises with colours on his face and sends down a chill within Kiran as he applies colour on her face in the most horrific and scary manner. This scene led to further exciting developments in the film.

Arjun Kapoor and Alia Bhatt's 2 States was based on Chetan Bhagat's book of the same name. In 2 States, the central characters Ananya and Krish are students of IIM-Ahmedabad and despite cultural differences, fall in love with each other. In the 2015 released film, Abhishek Varman, the director, has shown their love blossom with the help of the most colourful festival in India. The song titled Offo acts as the foundation of the film and constructs a beautiful narrative further. The scene where Alia's Ananya playfully sits on Arjun's Krish's lap is so far the cutest part of the song.

The team of PeepingMoon wishes its readers a 'film'tastic and safe Holi.