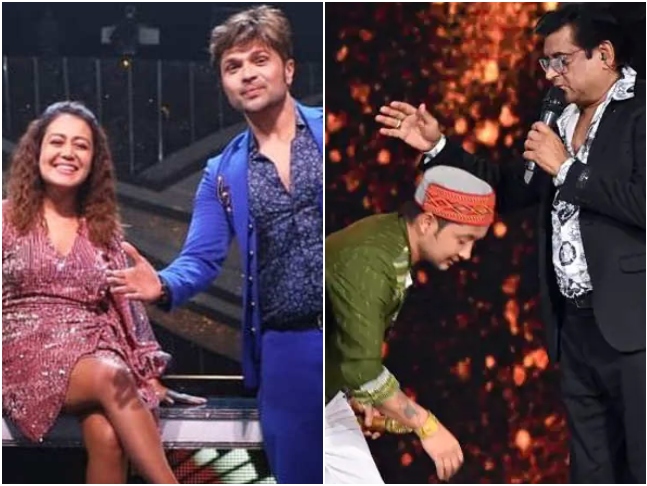 Kishore Kumar was a gem produced by India. Though many singers tried to copy him, his magic has remained untouched. Several reality shows and concerts had paid a tribute to the legendary singer and Indian Idol 12 was the recent one to celebrate the brilliance of Kumar. In the weekend episodes, the contestants of Indian Idol 12 along with judges Neha Kakkar, Himesh Reshammiya and Anu Malik sang 100 melodies of Kumar and the late singer's son Amit Kumar graced the stage as the guest. However, the recent episodes aired on Sony TV failed to entertain fans.

Judges Neha and Himesh were at the receiving end of trolls after the weekend episodes of Indian Idol 12 aired. Netizens brutally slammed them for the way they sang Kishore Kumar's golden songs. Not just this, the contestants were trolled for being praised by Amit despite not being able to do justice to the tracks.

Neha Kakkar do whatever you want to do with your songs

Please Indian Idol TRPs ke liye judges se phaaltu acting na karvaaya karo.
Specially Neha kakkar ko.
I have stopped watching the show since she entered the show.
Old #indianidol was pure Gold and today just trash and no recognition for pure talent.
This is not meant for hate.

Why?
When will it stop?
No variation.. same old technique in every damn song and that too unnecessarily @SonyTV

You know #indianidol is a crap when they had Sonakshi Sinha as a judge and Neha Kakkar - Himesh Reshamiya singing THE KISHOR DA's song.

expressions
I have not seen worst singer then him and @SonyTV is promoting him like he is best of India ?#indianidol #Indianidol2021 pic.twitter.com/PSXIAyQKCc

Sorry to say, but Himesh is murdering the legendary Kishor Kumar songs on #indianidol. The contestants are so much better.

Now, Amit, who was the guest, reacted to the whole backlash and told a leading daily that he was asked to praise the contestants. "Nobody can sing like Kishore Kumar, he was a mountain of a personality and man of many faces. The youngsters of today have no idea about him, they just know 'Roop Tera Mastana' from 'Aradhna'. I did what I was told. I was told sabko praise karna hai. I was told jo jaisa bhi gaaye usko uplift karna hai because it's a tribute to Kishore da. I thought it will be a homage to my father. But once there, I just followed what I was asked to do. I had told them to give me portions of the script in advance, but nothing of that sort happened," Amit shared.

Amit further revealed that he personally didn't like the episode.

Indian Idol 12 airs on Sony TV every Saturday and Sunday at 9.30 pm. Vishal Dadlani was the third judge with Neha and Himesh. But, due to the lockdown, the shoot of the reality show will be taking place in Daman. Hence, Vishal will not be able to join the team till the shoot resumes in Mumbai. Anu is filling in for Vishal.