While India is still struggling in its fight against the COVID-19 pandemic, the second wave of novel coronavirus has hit the country hard. The government announced a partial lockdown on April 4 that will continue till April 30 owing to the rise in COVID-19 cases. A complete weekend lockdown and a few restrictions during weekdays have been imposed till 8 pm.

Following the news, television actors Karan Patel and Nakuul Mehta have opposed the regulations made and took to their respective social media accounts to express their view. Karan Patel took to his Instagram stories and wrote, "Actors CAN shoot for their projects. Cricketers CAN continue to play their matches, day or night. Politicians CAN hold rallies with thousands of people. States CAN conduct elections and expect you to come out to vote BUT the common man CANNOT go to work (sic)." He also used the hashtag #Stupid and Outright senseless in his post. 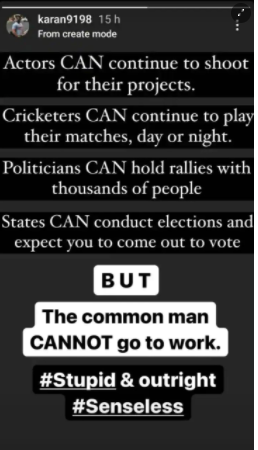 Nakuul Mehta also seemed to have similar views as Karan. Taking to his Instagram stories, he wrote, "Political rallies - Not needed, Bollywood Awards Shows - Nah, Religious Gathering - No, Kumbh Mela - Deffo not BUT ALONE IN CAR - YAAAS (sic)!!!!!" He was reacting to the new rule in Delhi that requires wearing a mask inside a car, even when driving alone. 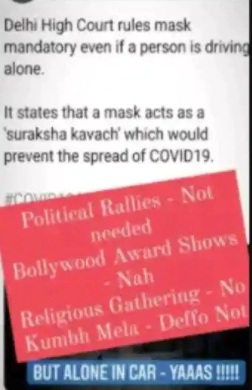 On the other hand, JD Majethia, the Chairman of Indian Films and Television Producers Council (IFTPC) said that he stands with uniformity with the government's decision.