Sidharth Shukla congratulates Asim Riaz on debuting on Most Desirable Men 2019 list, calls a truce on their ‘Bigg Boss 13’ rivalry

Sidharth Shukla and Asim Riaz were one of the most popular contestants of Salman Khan’s controversial reality show Bigg Boss 13. While Sidharth emerged the winner of the show, Asim walked away with a lot of popularity. The two had started the show on a good not but later on were at loggerheads with each other with multiple verbal and physical spat.

Now, both of them have featured in the 50 Most Desirable Men list. Sidharth was placed at the number 15 position while Asim made his entry in the list this year at No.17. Sidharth took to Twitter to congratulate Asim for making it to the list. 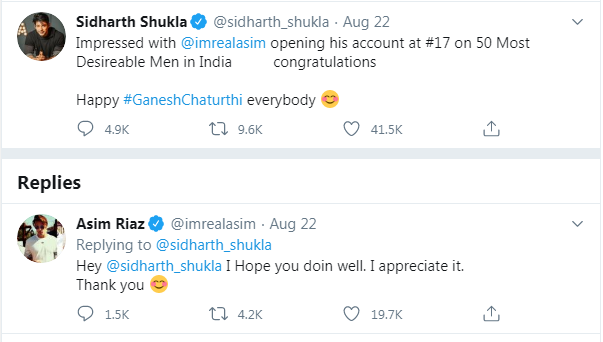 RECOMMENDED READ: Most Desirable Men 2019: Shahid Kapoor clinches the top spot, Ranveer Singh and Vijay Deverakonda come in at No.2 and No.3

Asim also appreciated the gesture and replied, “Hey @sidharth_shukla I Hope you doin well. I appreciate it. Thank you.” While Sidharth was declared the winner of Bigg Boss 13, Asim was declared as the runner-up. Their ugly fights in the Bigg Boss 13 house reached such a point that Salman Khan had to intervene and threatened to throw both of them out of the house.

After the show ended, Sidharth told a leading daily in an interview, “I am somebody who likes to move forward and I like to have a very cordial and peaceful relationship with everybody around me. Now when everything is fine, whenever we meet, we will definitely have fun.”