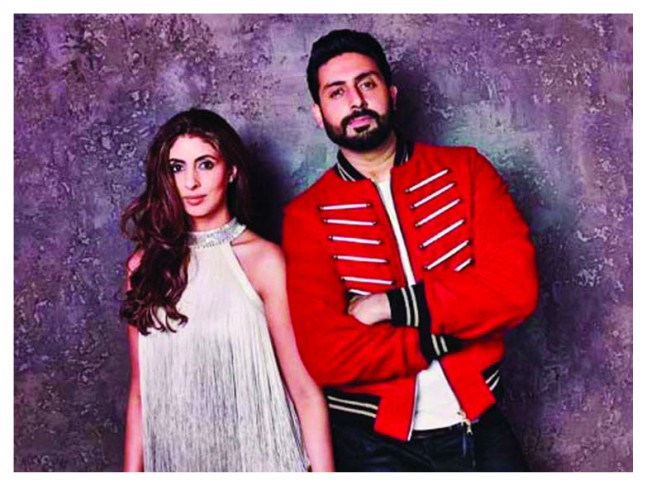 Season six of Karan Johar hosted celebrity chat show Koffee With Karan has managed to pull quite a casting coup this year. After step-siblings Arjun Kapoor and Janhvi Kapoor, it was another set from the same household who offered glimpses of what siblings in celebrity homes tend to grow up like and into - Sonam Kapoor Ahuja, Rhea Kapoor and Harshvardhan Kapoor. Thereafter it was the turn of step-brothers Shahid Kapoor and Ishaan Khatter who share the same mother, but their bond runs deeper irrespective of that. While putting these bhai-behen, bhai-bhai and behen-behen ka pyaar into words wasn't that difficult (except Arjun-Janvi maybe) a certain duo surely left us tongue-tied.
This Sunday's Koffee With Karan had Abhishek Bachchan playing the king of clapbacks, notorious younger brother to an obviously wiser, calmer and elder Shweta Bachchan Nanda aka Shweta Di. The Manmarziyaan actor was a bedwetter and a thumb sucker boy in his childhood years, and this was one of the skeletons that walked out of the closet during the Bachchan duo's Kuppa Jo(e) with Karan Johar last night.
Abhishek gave an account of why he chose to take a sabbatical after Housefull 3. Shweta drew our attention to the other side of nepotism, wherein she revealed that the hatred Jr. AB is subjected to is the reason why she wouldn't want her daughter Navya Naveli Nanda to enter Bollywood. The entire conversation was sprinkled with several moments of honesty and no-holds-barred confessions, a breather after the KL Rahul - Hardik Pandya fiasco.

Recommended Read: KWK 6 Rapid-Fire: Shweta ‘hates’ that Aishwarya takes ‘forever to return calls’; Abhishek ‘wishes’ Sanjay Leela Bhansali called him
The couch witnessed a certain novelty, Abhishek and Shweta were genuine and seemed absolutely incapable of lying or bluffing. Recalling the incident that gave birth to Shweta's and Karan's solid friendship, Abhishek didn't hesitate in calling out the racism at his own birthday bash. His remarks about KJo's excitement, in fact, even clarified that overenthusiasm isn't his thing.
The rest of the show was packed with lots of meat, beat and heat to the coffee conversation. It was heartwarming to see a sibling love-hate bond. But that's not even all about it. Going beyond their individual selves, Shweta and Abhishek revealed why their mother doesn't like the paparazzi and the selfies while the Shahenshah of Indian cinema still uses SMS over Whatsapp. There were giggles over Karan's blingy outfit and him making KWK all about himself, Shweta's lack of achievements and Abhishek's childhood habits.
We are, however, confused which reply to believe - Is Abhishek more scared of his wife Aishwarya Rai Bachchan or his mommy dearest? Shweta Di said it's the first one but he responded with latter's name.

Shweta and Abhishek come across as unspoilt, sincere and genuine sibling pair. There is no pretence here. Just two celebrity brother-sister, born to two legendary actors, being themselves. We can totally imagine these two in the drawing room of their plush residence, one being her daddy's little girl while other is a pampered mams's boy!
What happens when two honest people are put together on Karan's kouch? You listen to correct answers and relatable replies for about an hour. Reruns separate!

We wonder how Aishwarya, Amitabh and Jaya would be reacting to this family get-together on national television! Maybe we'll know soon, maybe not.