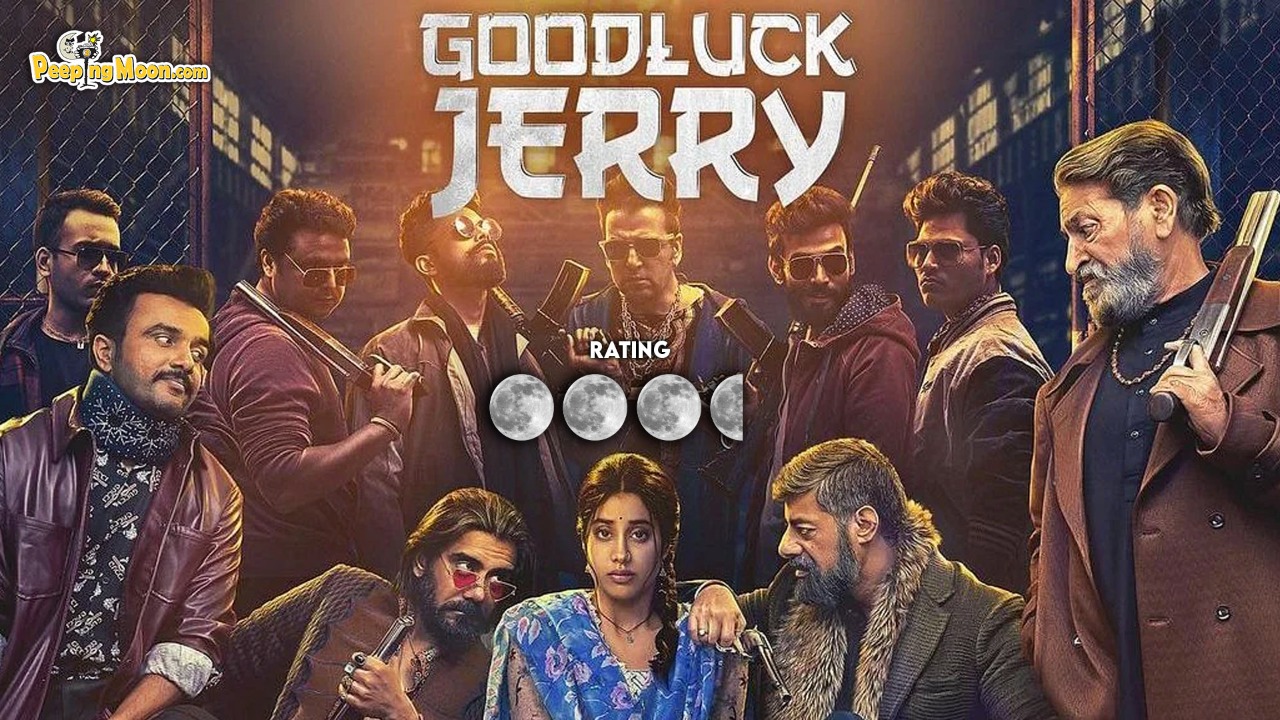 Not many films are made on the subject of drug-peddling in Bollywood but a worthy addition to the topic is Sidharth Sengupta’s Good Luck Jerry starring Janhvi Kapoor. Based on 2018 comedy-crime film Kolamaavu Kokila, Good Luck Jerry is about a 24-year-old docile girl Jaya (Jerry) Kumari living with her mother and sister in a small town in Punjab. The film also stars ace actors Deepak Dobariyal, Mita Vashisht, Sushant Singh and Neeraj Sood.

Jerry is in the middle of the chaos, but she comes out of it like a mouse running for its life. She knows how to get out of a situation and is aware of the ulterior motives of people around her. Good Luck Jerry is the story about Jerry’s family that comes together, fighting everything that comes in their way to live a peaceful life as she deals with the consequences of drug peddling.

The 2-hours-28-minutes long film is a survival story of a docile girl named Jerry (Janhvi Kapoor) living with her mother Sarbati (Mita Vashisht) and younger sister Cherry. Jerry’s father passed away a year ago and now the family is trying to hustle through their lower-middle-class lives. Financial circumstances lead Jerry to work in a massage parlour, deemed disrespectful by her mother. The dysfunctional family has a constantly peeping neighbour, Anil Ji (Neeraj Sood), who is single at the age of 55. Anil Ji adores Sarbati. Outside the house, there is an egg hop run by Rinku (Deepak Dobariyal) who is besotted by Jerry. Sarbati has a momo business, where she makes raw momos for vendors.

In this not-so-hunky-dory world, all hell breaks loose when Sarbati is diagnosed with cancer and they need many many lakhs to cure it. This leads Jerry into the drug world of Punjab. Peddling drugs is not a easy but life does not offer better choices to her. This situation makes Jerry a leading drug peddler in the gang and the boys of the cartel start being envious of her. One close brush with the police makes Jerry understand the risks of this job and she decides to quit. Only if it were that easy. Will the drug world lead her into a quagmire of more chaos or will Jerry be able to come out of it and save her mother? Watch the film to know more about Jerry’s life choices and if she makes it out safely.

Good Luck Jerry is a happy-go-lucky film. It does not deal with the topic of drug usage in India, but rather shows the world of the dangerous business of drug peddling. While the makers deal with the topic responsibly, they also add funny punches to it, making the film a laugh riot. But it’s not just another comedy. Good Luck Jerry is a nail-biter in it own way. It takes you on a roller-coaster ride that will make you laugh, cry and constantly be at the edge of your seats. The only things lacking in the film are practicality and realism. If a similar situation arises in real life, the outcome will be much more serious and difficult, not as bizarre as shown in the film. But again, that’s what cinema is for!

Janhvi Kapoor breathes life into the film. No fancy clothes or tons of make-up, just an honest good performance from her is what elevates the film. She perfectly blends innocence, comedy and thrill. The ‘real star’ of the film, however, has to be Deepak Dobariyal. He makes the film an even better watch with his flawless performance and effortless quirk. Mita Vashisht, Sushant Singh and Neeraj Sood and the entire supporting cast add to the importance of the story in their own way.

Hats off to Sidharth Sengupta for bringing Good Luck Jerry to life. His direction is A1 and so are the performances. Pankaj Matta’s writing is engaging but lacks realism. Rangarajan Ramabadran’s cinematography captures Punjab and the business of drug peddling in the most authentic manner. Prakash Chandra Sahoo and Zubin Sheikh edit to the point. Aman Pant’s music is happening and matches the tone of the film.