Advertisement
HomeWEBCASTYou have to accept that the makers saw potential in me: Janhvi Kapoor on claims of getting 'Gunjan Saxena: The Kargil Girl' because of her star-kid status

Janhvi Kapoor is all set to play the first Indian female airforce pilot Gunjan Saxena who went into combat during the Kargil war in her upcoming film Gunjan Saxena: The Kargil Girl. Unfortunately, her film has been at the receiving end of backlash ever since the trailer released. The trolls and negative comments for the trailer are coming amid the ongoing insider vs outsider debate. Janhvi, daughter of late actress Sridevi and producer Boney Kapoor, made her debut in 2018 with Shashank Khaitan's Dhadak. Netizens are now blasting the actress by claiming she got the film just because she is a star kid. However, Janhvi is quite confident about getting the film because makers 'saw potential' in her.

Talking about the same, the actress said, "Gunjan Saxena's story is about overcoming obstacles in your life, and it motivates me to do better. Despite what people are saying, I have belief in myself and my work in the film." She added, "I haven't done anything to deserve this kind of film. But you have to accept that I got it; the makers saw potential in me and wanted me. [One does not know] whether it is because of lineage, design or coincidence, but now, I have to give my best shot and justify the opportunity. I have to deliver more than what people are expecting of me." 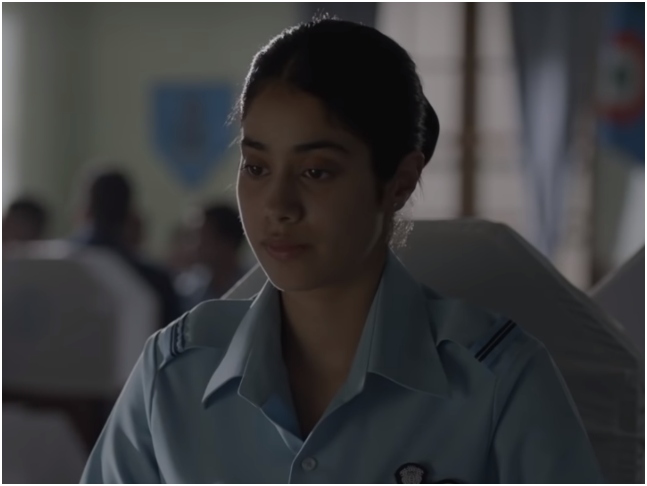 Recommended Read: If it's a little bit harder for people to accept me, then I’ll accept it: Janhvi Kapoor on getting hate for her film 'Gunjan Saxena: The Kargil Girl'

Before the shoot began, Janhvi and debutant director Sharan Sharma visited Gunjan Saxena in Jamnagar where she was based at the time. "I had imagined her as an aggressive and tough officer. But she was gentle and warm in her demeanour," said Janhvi. "She narrated her journey of becoming an air force pilot. She made it sound so simple that I asked Sharan if there was a story to be told here. But later, I realised that she viewed it as a smooth-sailing journey because she did not count any of the obstacles as hindrances. She learnt from them and propelled ahead."

Janhvi also revealed that her father Boney turned emotional on seeing her work in the film. "In the moments when I question myself, especially after reading the comments on social media, dad's words come as a source of reassurance." Gunjan Saxena: The Kargil Girl also stars Angad Bedi, Panjak Tripathi, Viineet Kumar and Manav Vij. It is directed by Sharan Sharma who is making his directorial debut with it. Gunjan Saxena: The Kargil Girl is produced by Karan Johar under his production banner Dharma Productions. The film is gearing up for a direct-to-web release. It will premiere on Netflix on August 12, 2020.