Bhagwan ko maante ho? If yes, then your prayers have been answered and the much anticipated Season 2 of Sacred Games is out. And we must thank God, again, for it not to be disappointing. Sacred Games Season 2 is as thrilling, intriguing and hooking as the first season. Or maybe, even more! Like the first season, this one also has two parallel timelines. One narrates Sartaj Singh’s (Saif Ali Khan) life in Mumbai while the other narrates Ganesh Gaitonde’s (Nawazuddin Siddiqui) across the world. The story transverses from one time period to another - a sort of contrast of the two lead characters. As Nawazuddin himself turns orator for his story in flashback, Saif unfolds key points of what danger Mumbai is in and amidst it, also deals with his complicated personal life.

Helmed by Anurag Kashyap and Neeraj Ghaywan, this season picks up straight from where it left. If Season 1 left its viewers in several doubts, then Season 2 is here to solve those and give new ones. But the big question still remains – WHAT WILL HAPPEN IN 25 DAYS? Sacred Games 2 begins with the same 25 days’ tension and this time we are at Day 13 with Gaitonde seen somewhere in the waters and Sartaj still struggling to save Mumbai. Soon, Pankaj Tripathi as Guruji takes us on his Kalyug vs Satyug journey. Sartaj, on the other hand, tries his best to mend things with ex-wife Megha and Ganesh shows a soft corner for Jojo. But soon, both Gaitonde’s and Sartaj’s disenchantment with their lives bring them close to Guruji’s aharam. While Sartaj’s struggle to save his city from terrorist Shahid Khan (Ranvir Shorey) is real, Gaitonde wants to be saved from no one but himself. Unsettling truths, complex betrayals and unforeseen connections emerge for Sartaj and Gaitonde. What happens next is a series of breakthrough revelations which will make it difficult for the audience to digest, especially the ending (WAIT FOR IT)!

Talking about performances, Saif as Sartaj, Nawazuddin as Gaitonde and Pankaj as Guruji up the ballgame. The effortlessness with which Nawazuddin delivers his dialogues will leave you wanting for more. Despite the cuss words in plenty, none of it looks forced or ugly. Saif impresses and how! Delivering a restrained performance with just the right balance between intensity and ease, the actor is impressive. And how can we not talk about the man himself – Pankaj aka Guruji – who not only has the power to keep all his bhakts hooked but also the audience. With Guruji, it's the pace, words and the style that creates an aura of mystery. Kalki as Batya is calm and composed but if need be, she can combat with much aggression. The ever-reliable Ranvir Shorey as Shahid Khan, the terror kingpin who has been linked to fictional terror outfit Hizbuddin, does full justice to his character. Surveen Chawla's Jojo gives a memorable performance too. 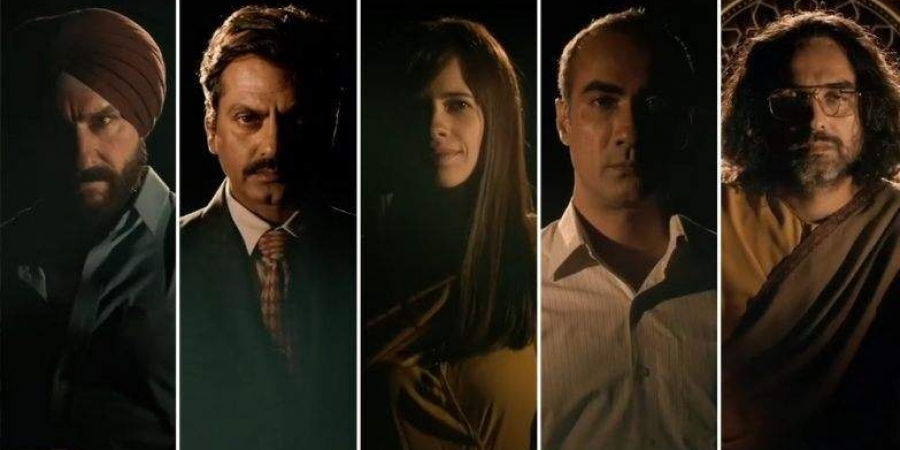 Both Anurag Kashyap’s and Neeraj Ghaywan’s effort to keep the second season as intriguing as possible is commendable. The eight episodes-show will make it difficult for you to blink your eyes, for there is so much you might miss, unwillingly. Sacred Games 2 sensitively deals with crime, corruption, and communalism.

If the first season left you with questions, the second one will leave you with the urge to watch more and more of it. Eight episodes will seem too less but in the end, chant Aham Brahmasmi and calmly wait for the next season's announcement.