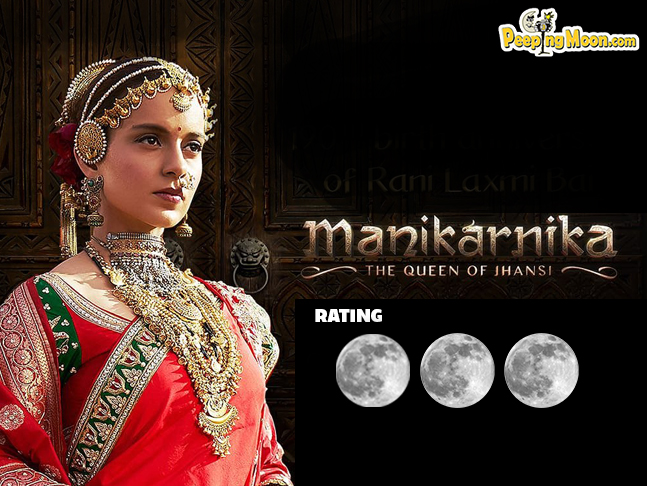 Film: Manikarnika: The Queen of Jhansi

Manikarnika is the story of dunya ki pehli ladki who goes into a daze after listening to a patriotic song. Where normal women have goo-goo eyes when they hear songs of their beloved, Manikarnika swoons when someone sings Bhaarat ye rehna chahiye! #NATIONALISM

The film basically starts as Shaadi.com for warrior princesses in pre-independent India as we see about a million slomo shots of Kangana Ranaut standing, glaring, running, smiling and throwing petals. Most of the time you can’t tell if she’s a warrior princess or about to walk into the cover shoot of Vogue. In a traditional avatar of course!

The dialogues are wooden, clichéd and at one point, I had to wonder if I heard right: two women named Sundar and Mundar come in to say hello. Sundar and Mundar? Really, guys? And what’s with the desi Robinhood who is a rebel one moment and an obedient soldier the next?

Now, the actual Rani Laxmi Bai was an inspiring figure and a nuanced character – a feminist back in the day who was an ace warrior with the kind of swordmanship that gave the British soldiers hell. Not unlike our Rani Laxmi Bai that has Kangana as a warrior, wife, mother, leader, patriot and queen.

Stills from Manikarnika: The Queen of Jhansi[/caption]

Recommended Read: Kangana remembers Bal Thackeray on his birth anniversary ahead of BO clash between Manikarnika and Thackeray

This film could have been a very gripping political thriller/epic but it ends up being a convenient ploy to glorify the virtues of loving your country, and acts like Kangana’s campaign speech if she were to stand for elections. It becomes a feature of a whitewashed fairytale rani… all in a bid to scream nationalism, patriotism and jewelry brands.

Yes, seriously! There is enough jewellery in this movie to run a country, so now you know why the villagers are so poor. At one point, Rani rescues a calf for the poor villagers.Behen itni tension hai, wear less heavy jewelry and donate it to the poor people, na? But no! We’ll keep wearing those jewels until we are smack in the face of war and will use them to melt into swords. Score!

You need to admire the very secure-in-his-masculinity Rajaji, Queen bee’s husband, who refuses to be dressed in less than 40 thousand necklaces. He hugs a newborn child wearing all that and I legit sympathised with the butt naked kid.

Manikarnika is mostly unintentionally funny. Whether it’s the decked up fake eyelash wearing Rani saying “Yehi book toh mujhe chahiye thi!” or Britishers yelling “I CAN TAKE WHAT I WANT” and “Bloody Indians” or villagers nodding and going ooh and aah... it actually induces laughter.

Rani Laxmi Bai introduces herself like Daenerys Targaryen from Game of Thrones but she’s got no dragons. Just sword and ... her pearls...? At this point, the only thing I was thankful for was that the Angrezes aren’t speaking to each other in Hindi. Cue: Thugs of Hindostan!  But I was thankful too soon for soon enough, the elder general was getting riot reports in Hindi. Also Rani Laxmi Bai and Gordon, one of the evil Brits, have a conversation in Hindi when they both speak English.

As far as performances go, Zeeshan Ayub, Ankita Lokhande and Richard Keep manage to bring some power to the screen – everyone else sounds amateurish. Leading lady Kangana excels in the high-intensity, emotional scenes but when it comes to regular conversations, she appears frozen and wooden.

The film’s scale is great, the visuals are pretty decent and there are some especially empowering motifs of women warriors, and notions of discarding some of the pathetic ways of how a widow should behave. But every 15 minutes, there is a lecture about your motherland by Kangana. She just randomly appears at opportune moments to tell you about how you need to die for the country. Perhaps, it’s a nice message to sell in this election year.

Manikarnika: The Queen of Jhansi is portrayed to be a historical epic but it’s not. It seems that Kangana decided to take the easy way out and rely on the current tried and tested formula of patriotism to bring audiences to the cinemas.

So the final verdict? If you are a big Kangana Ranaut fan and want to die for the country, please watch Manikarnika: The Queen of Jhansi. This is not a Sanjay Leela Bhansali type-of magnificent period drama, be warned, but Kangana debuts as a rather sensitive director and perhaps that’s why Manikarnika belongs to her.