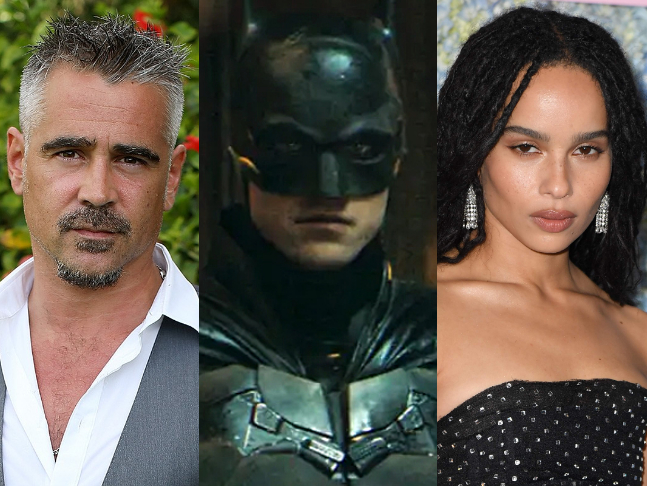 Fans of The Batman were in for a treat when they got a look at the cast of the upcoming film when Robert Pattinson, Zoe Kravitz and Colin Farrell were spotted filming the Matt Reeves superhero reboot.

Zoe was photographed on the set looking chic in an all-black ensemble with a black velvet fascinator along with knee-high lace-up boots and fishnet stockings while filming in St. George's Hall, Liverpool, England. Zoe is playing the role of Selina Kyle aka Catwoman in the film.

Zoe Kravitz as Selina Kyle and John Turturro as Carmine Falcone on set today in Liverpool.

Her co-star, Farrell looked unrecognizable while filming the same scene as he was under heavy facial prosthetics. He wore a black leather trench coat, and a black suit with a lavender button-down shirt. Farrell is playing the role of the villainous Oswald Cobblepot or more popularly known as The Penguin.

His smile
&
Colin as Oswald Cobblepot on the set of "The Batman"
Oct. 12, 2020#ColinFarrell #TheBatman #ThePenguin pic.twitter.com/asbbEhBtqq

The cast looks amazing. I’m hoping we get a look at maybe Andy Serkis as Alfred or Paul Dano as Riddler on set sometime soon.

This is oscar worthy. Makeup artists did an incredible job with the prosthetics. #colinfarrell #thepenguin

Robert’s Bruce Wayne was spotted stepping out of a black Corvette. The film’s production was halted when the film’s lead actor Robert tested positive for Covid-19. The filming started in late September after the actor tested negative for Coronavirus. Filming on The Batman was previously suspended for six months amid the first outbreak of Covid-19 worldwide.

The film also stars Paul Dano, Jeffrey Wright, Andy Serkis, John Turturro star as well. The Batman will be released on March 4, 2022, after its previous 2021 release date was pushed back earlier this month.