Gwyneth Paltrow has drawn the ire of angry feminists for posting a photograph of a nude woman to promote her lifestyle company, Goop. The picture was posted by Paltrow posted on the official Instagram account of the actress' company, to promote body positivity. The image captures a naked blonde woman standing in a field from behind. The model is seen stretching her arms upwards towards the sky. Paltrow's firm has posted the picture on September 11, and angry reactions from feminists started pouring in soon after, reports "aceshowbioz.com".

"Goop you get this wrong so often. Your insta posts are millennial white girls and now this unrealistic body image. For claiming to be about empowering women you need a reality check and get real. Please," wrote one offended user on Insta. "Such a superficial idealized image - really?" went another reaction. 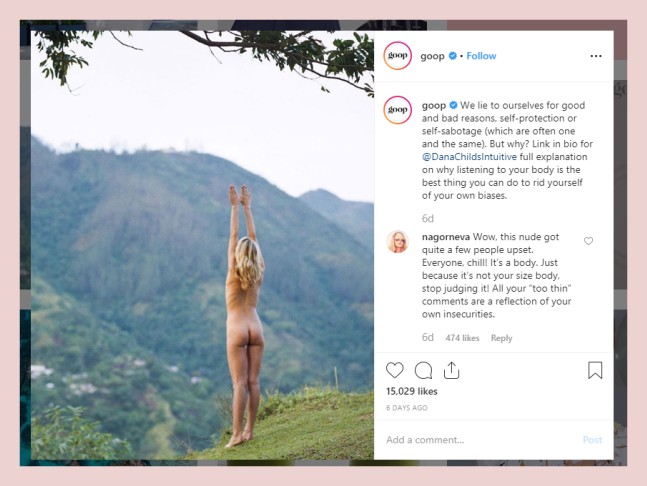 However, Paltrow's fans came to her rescue. "It's a body. Just because it's not your size body, stop judging it! All your 'too thin' comments are a reflection of your own insecurities," wrote a Paltrow loyalist. "Wow, this nude got quite a few people upset. Everyone, chill!" wrote another fan.

This is the second time in a week that the actress has been in the news for the wrong reasons. Earlier this week, the actress said she had been "petrified" about fallen Hollywood mogul Harvey Weinstein's tendency to harass her and then silence her, following which the disgraced producer's office dismissed her claims as "gratuitous".