Game of Thrones Season 8: Jamie's and Brienne’s 'blink and miss' sex scene in Ep 04 explodes the social media with memes

For those who ship Brienne of Tarth and Jamie Lannister, we have good news for you. Rejoice, as this long due ‘ship’ has finally sailed away in glory.

It all happened when Jamie found out that Brienne is a virgin in a drinking game at the celebratory feast, post defeating the Night King in episode 3 of Game of Thrones. Ser Brienne was taken aback by the virginity question and Jamie went right behind her. Well now we know why *wink wink* 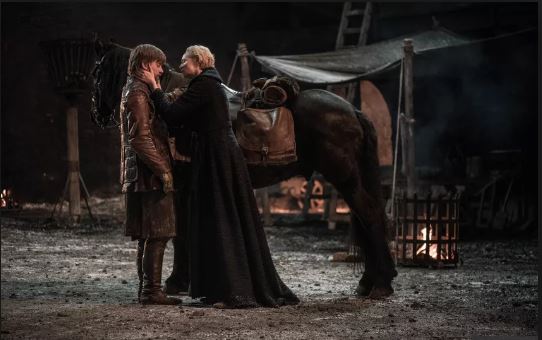 Recommended Read: Game of Thrones Season 8 preview of Ep05: With every character’s fate hanging in the air, the ‘Final War’ to begin on Cersei’s Turf. DRACARYS!

As this pairing was a long time in the making, the social media dint held back with their feelings about this duo. Although their happiness was short-lived as Jamie left Brienne behind him and headed for Kings Landing, the internet was set on fire with their ‘five-second sex’ and we have the hilarious response possible. Check them out!

Me when Jaime and Brienne finally banged vs. Me when he left her for her toxic ex#GameofThrones #GOTS8E4 pic.twitter.com/CFlYz29cv7

Me: Man Jamie has turned into a real cool dude glad his character has grown so much

I BELIEVED IN YOU JAIME!!! YOU BETTER BE IN KING'S LANDING TO KILL YOUR SISTER!!
I AM: HURT#GameOfThornes #GOTS8E4 pic.twitter.com/sNJYeq1Z72

See, Brienne, Jaime got you looking like Boo Boo the Fool when you coulda been with a real man like Tormund #gameofthrones #GOTS8E4 pic.twitter.com/gwHxVPYF6R

jaime really thinks cersi is gonna love him like brienne could. bitch brienne is the best thing that ever happened to you you trick ass bitch #GamefThrones #GOTS8E4 pic.twitter.com/GZ9Il91YRh

Tormund when he hears Jaime has left Winterfell #GOTS8E4 #GOT #GameOfThrones pic.twitter.com/48mwvKhOSq