Yes, you read that right! Idris Elba is officially off the market. The actor exchanged wedding vows with longtime girlfriend Sabrina Dhowre in a three-day ceremony in Morocco. Unknown to many, Idris is also a DJ and reported grabbed the microphone and performed for his inebriated guests.

In images captured by British Vogue, the couple, who got engaged last year, looked smitten as they wed at the Ksar Char-Bagh hotel in Marrakesh on Friday. One of the photographs posted showed the pair just after they exchanged their vows, as they passionately embrace while the former beauty queen flashes her dazzling ring.

Congratulations to newlyweds #IdrisElba and #SabrinaDhowre who exchanged vows in Morocco on April 26 2019. Celebrations were spread over three days in Marrakech. See more in the world exclusive in the July 2019 issue of #BritishVogue. Photographed by @SeanThomas_Photo.

Recommended Read: 007 fans brace yourself! Bond 25 cast posters are out and we're stoked!

Sabrina opted for two exquisite dresses by Vera Wang for her big day while Idris looked dapper in a bespoke suit by Ozwald Boateng. With a 'colours of the Souk' themed dinner on Thursday night and their extravagant nuptials on Friday, the three-day celebrations culminated with an all-white party at a hotel. It was February last year when Idris, who is known for his roles in Luther, Thor and Prometheus, got down to one knee to pop the question to Sabrina. The star met his now wife in her home country of Canada in 2017 and became acquainted on the set of the drama film The Mountain Between Us. 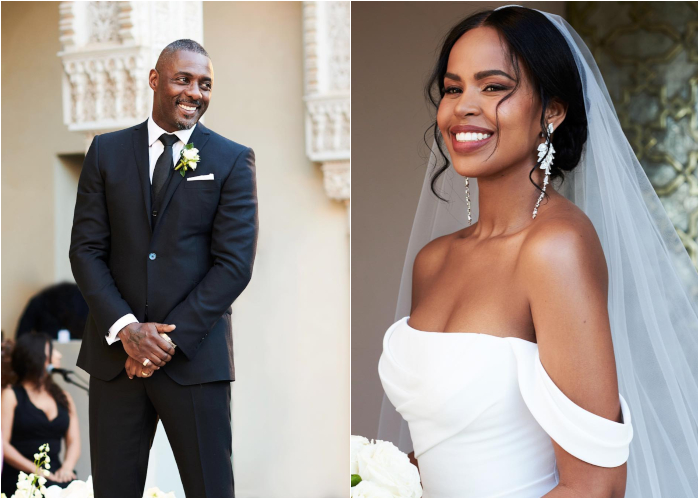 What added the cherry to the cake was Idris' surprise musical performance during his reception. The star stole the show when he rapped over Afro Beats star Davido's performance as his wife danced alongside celebrity shoe designer Christian Louboutin. A source told the media, "It was everything you could wish for. Guests had patron shots, cocktails and endless champagne. Christian Louboutin loved every minute and grabbed Sabrina for a spin -- but not before he had a dance-off with the singer Davido himself as the crowd cheered them on.

"It was the wedding party of the year -- and there were lots of sore heads the next morning," reported guests. The star met his now wife in her home country of Canada in 2017 and became acquainted on the set of the drama film The Mountain Between Us.