Late-night host and host of the 90th Academy Awards, Jimmy Kimmel set the mood with him and some stars bringing a political edge to the movie-centric event, taking shots at President Trump, Vice President Mike Pence and even Fox News viewers. He also launched into a monologue that made fun of the year gone by in Hollywood, which saw the #MeToo and Time’s Up movements dominate the headlines and previous award shows.

Kimmel praised the actual Oscar statue, noting its age of 90 and taking a jab at Fox News viewers as he did so: “Oscar is 90 years old tonight, which means he’s probably at home tonight watching Fox News.” Another shocker about the Oscar statue… “Keeps his hands where you can see them, never says a rude word, and most importantly no penis at all. He is literally a statue of limitations.”

He also explained that winners were allowed to say whatever they wanted in their acceptance speech, encouraging people to comment on the recent shooting in Parkland, Fla. as well as other activism related to the #MeToo movement.

Recommended Read: Oscars 2018: All The Must See Looks From The Red Carpet

Kimmel introduced a new technique to keep the speeches short and bearable. He announced that he would be timing every winner’s speech, and the one delivering the shortest speech would win a jet-ski. At the end of the night, it was Phantom Thread costume designer Mark Bridges, who actually took home the jet-ski worth almost $18,000. His timing: Around 30 seconds!

The Oscars started off by going black-and-white. Jimmy Kimmel channelled his inner old-time broadcaster, as he welcomed the “godless Hollywood elites”, giving them a vintage newsreel treatment as they strolled the red carpet and sat in their seats in the Dolby Theatre. More dark humour followed as he asked if Emma Stone, who had won an Oscar last year for La La Land, would do it again tonight – he himself answered “No.” Other dark ones included: Call Me by Your Name star Armie Hammer being “born when a witch put a curse on a Ken doll,” and that Black Panther’s Lupita Nyong’o was “born in Mexico and raised in Kenya. Let the tweetstorm from the President’s toilet begin!” The first Trump joke came less than two minutes into the broadcast, by the way.

If last year Kimmel brought a tour group to the Oscars, enabling them to say hello to celebrities in the front row, this year he played the prank in reverse. He surprised a cinema hall-full of regular viewers of A Wrinkle in Time by turning up with a clutch of A-listers, including Lupita Nyong’o, Margot Robbie, Gal Gadot, Mark Hamill, and Guillermo del Toro! They also carried snacks, including a giant sandwich and a hot-dog cannon, as Kimmel commented, “There’s a strong odour of marijuana in this theatre…I noticed you don’t have any snacks—and especially considering the smell in this theatre…”

Comedian and actress Tiffany Haddish and co-presenter Maya Rudolph walked out on stage wearing their footwear, saying “We are so happy to be here but our feet hurt!” The two also made light of this year's diversity at the Oscar’s with Haddish saying, “I know what you're thinking. Are the Oscars too black now? Don't worry. We were just backstage and there are still a bunch of white people still to come.” Haddish also let it be known – not that most had missed it! – that she had worn her Alexander McQueen dress before. She not only wore the dress to the premiere of Girls Trip in July and her stint as host of ‘Saturday Night Live’ in November, but also dedicated half her opening monologue to it. Attagirl! 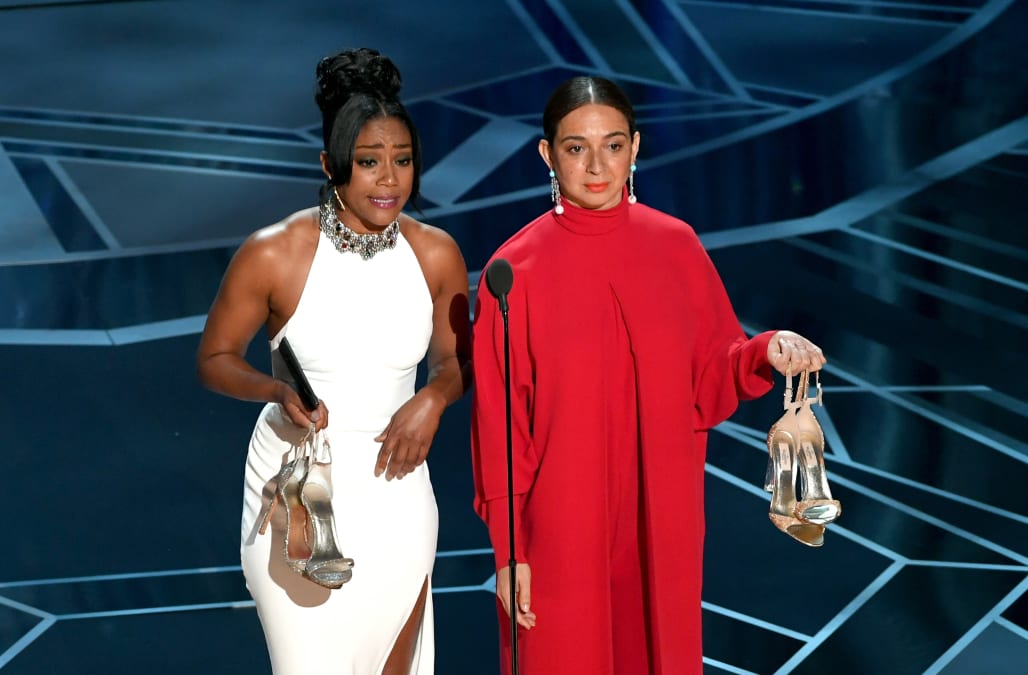 Brave and beautiful trio - Ashley Judd, Salma Hayek, and Annabella Sciorra – who are among Harvey Weinstein’s most prominent accusers, presented a Time’s Up segment, about breaking barriers and changing the culture in Hollywood. “It’s an honour to be here tonight. This year many spoke their truth and the journey ahead is long, but slowly, a new path has emerged,” Sciorra said. Judd added, “The changes we are witnessing are being driven by the powerful sound of new voices, different voices, of our voices, who are joining together in a mighty chorus that is finally saying Time’s Up.” Hayek pointed out, “As you can see, this is emotional and we’re a little bit shaky, we ask you to join us as we take a look at some of these trailblazers,” as she introduced a montage of this year’s films, including Mudbound, Lady Bird, and Get Out, with stars speaking on the impact of the last six months.

On stage to collect her Best Actress award for Three Billboards Outside Ebbing, Missouri, Frances McDormand invited all the female nominees in the audience to stand up together. “Okay, look around everybody... because we all have stories to tell and projects we need to finance,” she said, calling for more female representation in film, adding: “I have two words to say: Inclusion Rider.” The term means when a cast and crew make it a required part of their contract to hire a diverse crew around them. 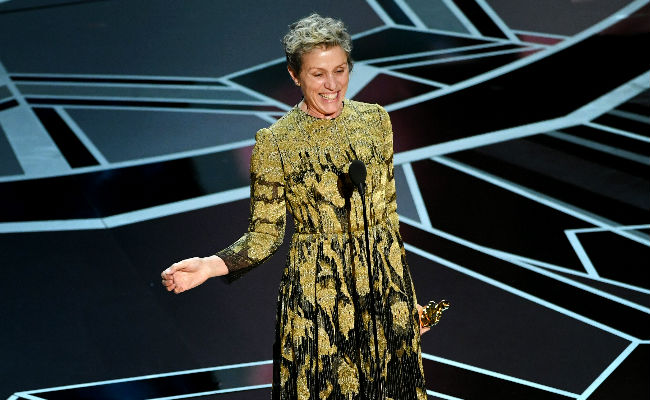 A strong moment of déjà vu, as Best Picture presenters Warren Beatty and Faye Dunaway returned to present the award this year as well. It was a time to right the wrongs of the 2017 Oscars which had ended with the most shocking moment in the 89-year history of the Academy Awards: Best Picture presenter Warren Beatty had been given the wrong envelope and his co-presenter, Faye Dunaway, erroneously announced that La La Land had won, instead of Moonlight. No gaffes this time around, thankfully!

Jordan Peele was adjudged winner in the Best Original Screenplay category, making him the first black screenwriter to receive this honour. Winning the honour for Get Out, Peele thanked the people "who raised my voice and let me make this movie." He also made history becoming the first black director to receive nominations in the writing, directing, and best picture categories for his directorial debut.

Hindi film movie greats Shashi Kapoor and Sridevi were among those honoured in the 'Memoriam' montage, which pays tribute to all from the film industry who passed away in the past year. Eddie Vedder performed a Tom Petty song live, as 'In Memoriam' also remembered former James Bond Sir Roger Moore, French star Jeanne Moreau, actors Martin Landau and Harry Dean Stanton, actor and playwright Sam Shepard, among others.