Fashion giant Calvin Klein has found itself in troubled waters. The brand’s latest campaign for Mother’s day drew a lot of ire on social media for promoting a ‘pregnant man.’ Yes, you read that right!

Highlighting the ‘realities of new families,’ CK featured the couple Erika Fernandes and a transgender Roberto Bete who were expecting a child anytime soon, only it was the man who was carrying a baby. Roberto, a Brazilian female-to-male transgender reality TV personality, was photographed posing alongside his wife, flaunting his bump, dressed in intimates from Calvin Klein. Check out the series of pictures below:

Recommended Read: A slap in the face to those actually facing poverty: Netizens disapprove of Balenciaga’s overly distressed Paris sneakers

However, this post did not seem to go down well with the netizens as they accused the brand of ‘virtue signaling.’ Many of the users called out the ‘woke’ campaign saying this has nothing to do with clothing and while others tweeted some transphobic comments and threatened to boycott the brand. Check out the tweets and comments below:

PREGNANT MEN IS THE NEW NORMAL? ACCORDING TO CALVIN KLEIN THIS MAN IS A MOTHER. WELCOME TO NIGHTMERICA #BoycottCalvinKlein pic.twitter.com/kmYJzoBTi5

I won’t be spending any more of my money with ‘woke’ company Calvin Klein. What do y’all think? pic.twitter.com/pdWA8s3DMu

I'm assuming this will take over all ads and commercials at some point. They wanna beat it in your heads that this is cool/normal. #boycottcalvinklein pic.twitter.com/C6kklwiYRG

No more Calvin Klein for me and my family #boycottcalvinklein #EnoughIsEnough

You can remove breasts, that still doesn’t make you a pregnant MAN. The #CalvinKlein advertisement is trying to Grooming us into agreeing with them. Clearly the ‘Woman’ still has her uterus. Again, NOT A MAN. #BoycottCalvinKlein 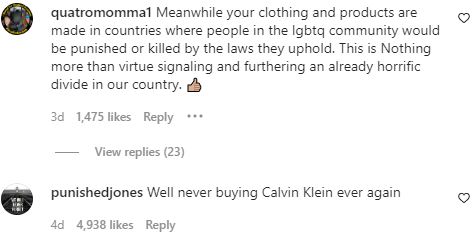 Authentic or virtue selling? what are your thoughts on this campaign?