Seems like the designer label of Papa Don’t Preach, founded by Shubhika Sharma woke up and decided to not things slide anymore. The homegrown designer label who had dressed international celebrities such as Chrissy Teigen, Mindy Kaling, Meena Harris, Alok Menon, Brianne Howey amongst many others took a stand for itself and called out the ‘fashion influencers’ who promoted the rip-offs of its original creation.

‘They can steal your recipe but the sauce won’t taste the same.’ Quoting Kim Kardashian, the designer label did not mention any names as such but urged the influencers to correct their course immediately. In spite of sending multiple DMs, legal notices and commenting on their reels and posts, these anonymous influencers did not pay heed to its requests and continued to gain traction from its millions of followers by not taking down the replica of its original creation.

A post shared by Papa Dont Preach by Shubhika (@papadontpreachbyshubhika)

With enough being enough, the designer label has finally broken its silence and shared a strong-worded post with multiple screenshots. “It’s been over 10 years we haven’t said anything. We’ve kept all our communication civil- via email, DMs and texts. But now, it just feels too much…” read an excerpt from its post. The designer also stated that once an influencer with 3M followers wore a replica of its lehenga and even after multiple DMs and comments on her post, her response was, “Thanks for letting me know.’ After a year when the same influencer made a sourcing request from PDP, the designer label politely declined the request as she did not stand up for the brand when needed.

The brand also stated that they see a lot of brides wearing a dupe of their OG creation, local shops minting off the money of its hard work and dedication but what pains the most is when the fashion influencers, with a capability of influencing the millions, flaunt a rip-off and ‘stand against the very industry they claim to represent.’ “When brides wear our copies and tag us, we let it go. When fashion stores make profit off of our original work, we have no option but to let it go (for now). But when you, dear Indian influencers, with all your power to influence the millions stand against us and not with us, when you enable others to steal from us so blatantly, then from one creative person to another- how do you sleep at night? When you do it, it is UNACCEPTABLE, and we won’t let this one go.” 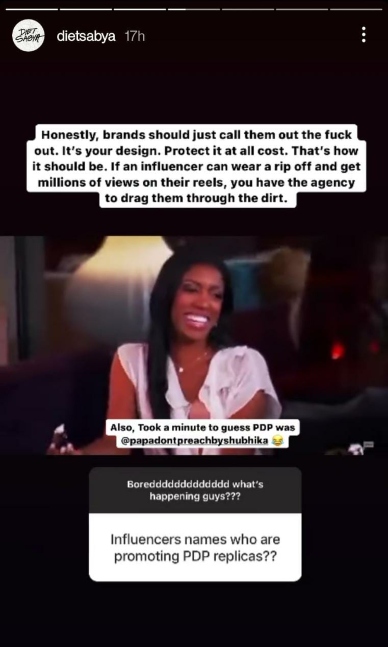 Papa Don’t Preach’s post indeed made the right noise and garnered likes from its fans all around. Stylists and designers such as Mohit Rai, Divyak D’Souza and Payal Singhal stood up for the designer label. Fashion police Diet Sabya shed a light on this topic on their Instagram story and called out the first influencer Kritika Khurana a.k.a That Boho Girl for wearing and publicizing the designer’s rip-off. 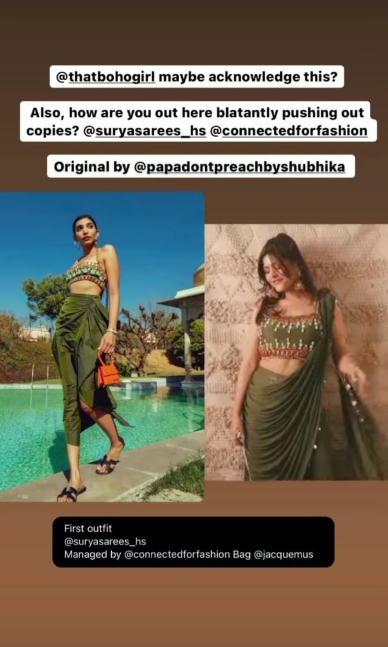 In the end, the designer label also thanked the followers who pushed them to share this post and influencers like Masoom Minawalla, Sakshi Sindhwani, Juhi Godambe, Komal Pandey, House of Misu, Shereen, and other who are trying to do the right thing. “For the rest, be better,” concluded the designer label.

Thanks to her 300 mn fanbase, Kylie Jenner becomes the FIRST woman to have the third most followed account on Instagram!

‘And Just Like That’ the makers of ‘Sarah Jessica Parker’s SATC reboot face flak for cultural appropriation by labeling lehenga conveniently as sari!

Sorry, I mean it: Hairstylist Jawed Habib issues apology after the spitting on woman’s hair with ‘humorous’ intent

“Katrina Kaif is methodical and meticulous, Both didn't see what the other was wearing until the wedding day: Sabyasachi Mukherjee spills the beans on THE bridal look of the year!