Keeping Up With The Kardashians' star Kim Kardashian has been going through a controversy-filled patch. The reality TV star found herself in some hot water yet again after wearing the Om symbol, a pious symbol in Hinduism, as an earring.

A prominent fashion icon globally, Kim’s outfits and looks are always a talking point. However, netizens expressed their dismay at her latest photoshoot in the comments section, accusing her of 'cultural appropriation.' This goes hand in hand with the lawsuit she faces by her ex-employees accusing her of violating California Labour Laws. 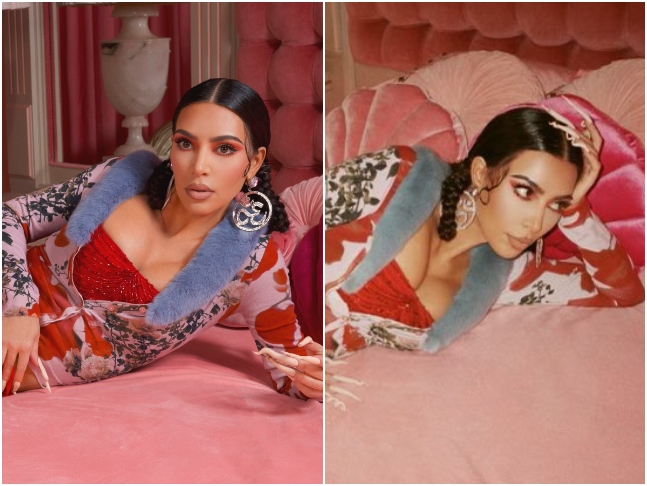 Recommended Read: Vogue Scandinavia becomes the first global edition of the magazine to sell exclusively from its digital flagship store

Om is a sacred sound of a spiritual symbol, and is chanted in many hymns, prayers, and otherwise as a pious syllable majorly in the Hindu culture. In the pictures she uploaded on her Twitter, Kim could be seen wearing a sheer and corseted red dress, a floral pink and red jacket with light blue faux fur lining, and the Om symbol in hoop earrings.

Twitter was not happy. Many users tried to explain how this was cultural appropriation while others expressed anger.

Is now a good time to mention that the Om is a sacred symbol to Hindus and not just an accessory?

The Aum sign is a scared symbol to Hindus , and you get her using it as an accessory? This ain’t it. https://t.co/OjABBt6pua

How hard is it not appropriate something? This is really insensitive. The Om symbol is very sacred to Hinduism. And you using it as a mere accessory is fcking annoying. Delete this and please educate yourself ffs.

using the respected parts of our culture like om or ganesha is not an aesthetic. stop disrespecting cultures to look cool

Okay here's the thing. She is not wearing the Om symbol to mention the significance or spirituality behind it. It's just an accesory for her. If you want to appreciate a religion or culture, do that. But wearing a symbol cause omg its so cool, that's just disrespectful.

If it’s socially accepted at beach, should be the same everywhere: J

A slap in the face to those actually facing poverty: Netizens disapprove of Balenciaga’s overly distressed Paris sneakers