In an effort to put an end to copycats and plagiarists, Diet Sabya, the infamous, anonymous Instagram handle started his page on a mission to call out stylists and designers who conveniently escaped the drill. Diet Sabya is now sparing no one! Going 'slightly pivot from its original goal', Diet Sabya started putting out experiences of people working with fashion companies about their toxic work environment and extremely unprofessional ethics.

Diet shared some disturbing stories of employees talking about the unhealthy behaviour they had to deal with but the one that shocked everyone was that of Indian beauty, wellness, and fashion company Nykaa. Founded in 2012 by Falguni Nayar, Nykaa is India's No 1 beauty story both online and offline. Diet Sabya highlighted workplace harassment and toxic work culture including rape jokes with a post addressed to Nykaa. It all started when the account posted some screenshots about an unnamed CXO at Nykaa and some disturbing acts of theirs. The screenshots had details of how an employee was treated if he/she came from a 'not so rich' background and had to take a train/bus to reach office. It also included open rape jokes and racism to a level where it was extremely demeaning. The screenshots created a stir amongst the followers of Diet and several people called out Nykaa for this horrible behaviour with employees.

Sharing every screenshot, Diet Sabya wrote, "Fun times? @mynykaa @nykaabeauty @nykaafashion This is what the behind-the-scenes at India’s biggest beauty e-commerce looks like. And, this is clearly not an one-off moment. Discuss! (As told to us by source) #dietsabya #issuedinpublicinterest #workplaceharassment"

Fun times? @mynykaa @nykaabeauty @nykaafashion . This is what the behind-the-scenes at India’s biggest beauty e-commerce looks like. And, this is clearly not an one-off moment. Discuss! . . (As told to us by source) #dietsabya #issuedinpublicinterest #workplaceharassment

Several former Nykaa employees have also come forward in the comment sections to confirm the toxic work culture in this fashion and beauty company. Besides this, there have also been certain reviews in Glassdoor highlighting the misbehavior of the unnamed CXO, stating that no one from the management has taken any action against the accused as she had been associated with the company since the beginning.

Soon after Nykaa commented on the post saying they 'have a zero-tolerance policy against such behaviour. Their comment read, "We have a zero-tolerance policy against any racism, body shaming, or any comments that cause humiliation or offense. Nykaa has an internal redressal mechanism to address such cases. The comments are unsubstantiated,” Nykaa had also added that the source can contact the company through [email protected]. However, it has been alleged that the email id did not exist before the issue came to light. 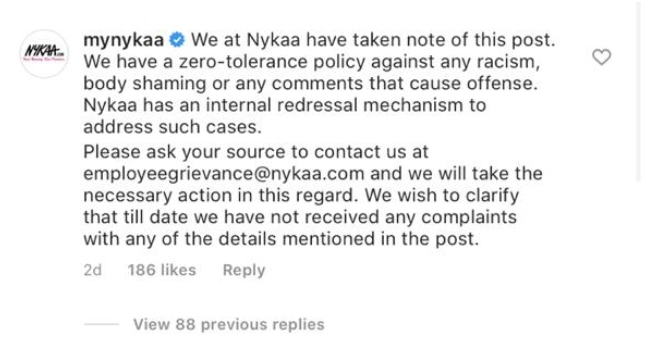 Adding to the controversy, ex-employee Priya Chhetri confirmed Nykaa's unbearable work environment with her own story where she faced racism for being from Nepal. Diet shared the screenshots as well on its story. 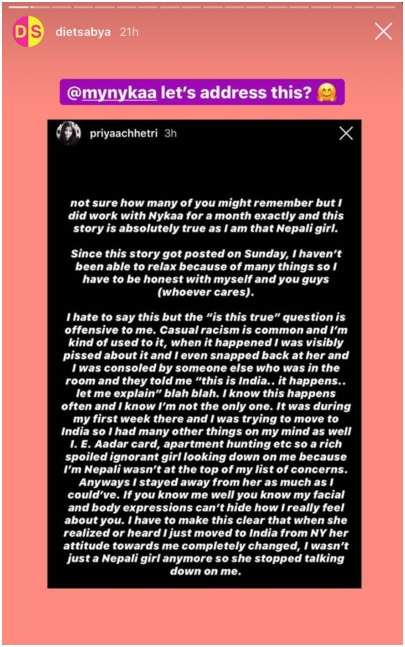 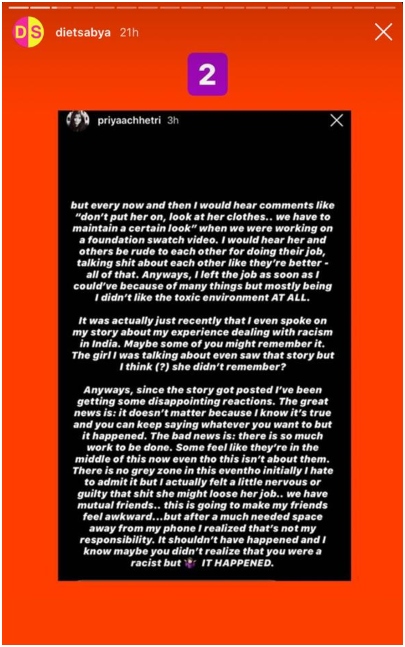 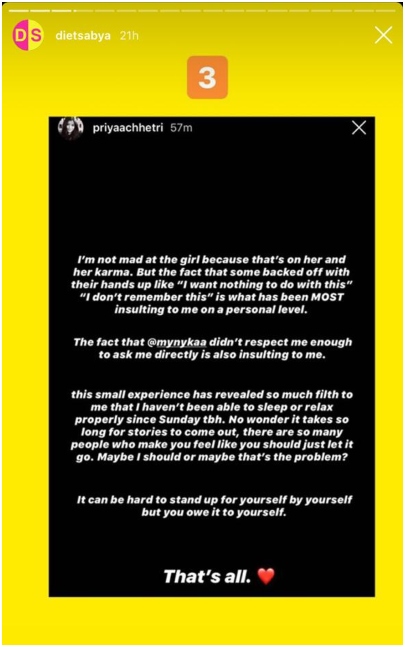 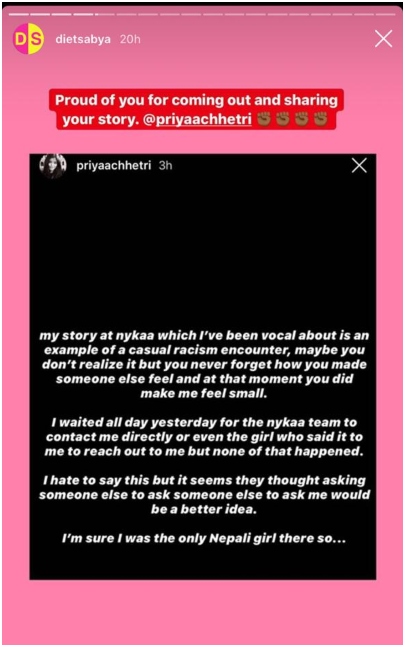 However, when questioned about why the page is getting into work environments and employee stories when its aim is to call out fashion copy cats, Diet Sabya issued a note saying it would be slightly pivoting from its original goal to help people reach out better. The page shared a note that read, "Guys. We started out calling out plagiarism or #GandiCopy, as we like to call them. And even though we've helped deal with issues in the past (payment problems, jobs, bad behaviour etc), it was definitely as a side note to our primary goal of championing originality. However, in the past 48 hours, we've seen countless (we mean 100s) of girls and boys, come out and talk about their trauma. It's been triggering. They've been holding this trauma for months.As Diet Sabya shared the story, they in return received threats. Nykaa in response dropped a comment on Diet Sabya's post and wrote, "We at Nykaa have taken note of this post. We have a zero-tolerance policy against any racism, body shaming or any comments that cause offense. Nykaa has an internal redressal mechanism to address such cases. Please ask your source to contact us at [email protected] and we will take the necessary action in this regard. We wish to clarify that till date we have not received any complaints with any of the details mentioned in the post." Mouni Roy and beauty wiz Mona Kattan have a surprise cookin' up, share a sneak peek on social media