Recently, singer-actor Nick Jonas opened up about the connection between his wife and actress Priyanka Chopra, Sophie Turner and Danielle Jonas, saying it is "kind of a dream".

Nick commented on the close relationship that has been formed between Priyanka and his brother Joe’s fiancee Turner In an interview to Entertainment Tonight. The Chains singer admitted, "It's a great feeling. I mean, it's kind of a dream where, as close as we are as brothers, that our wives and fiance are so connected as well,"

Recommended Read: When Nick Jonas ran out of beer at his wedding to Priyanka Chopra

He also went on to say that reforming the Jonas Brothers band was "obviously a huge adjustment for everybody", but they have gotten nothing but love and support from their significant others, including Kevin Jonas' wife Danielle. "These incredible women have handled it so well and have been the best support system for each of us, individually and as a group," Nick shared. "To get to share that with them is a really amazing thing." 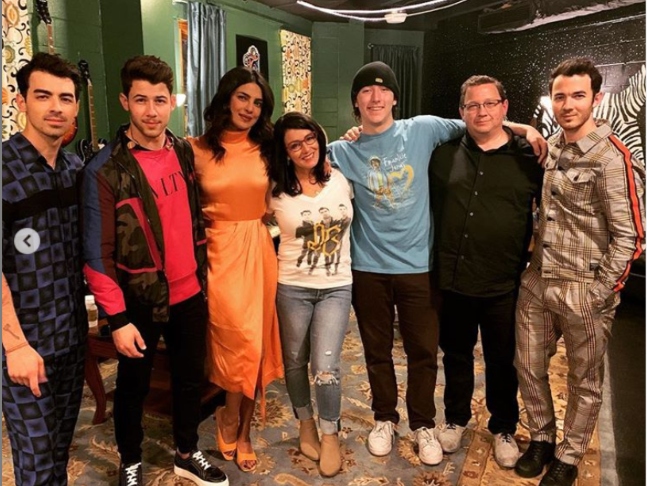 The 26-year old also spoke about how he has managed to blend in with his wife’s family while Priyanka has been welcomed into Nick's close-knit family. Nick added, “In everything we do...our house is for everyone, our doors are always open," he added. "That is, in my opinion, how it should be."

Say what? Cardi B's massive colourful back tattoo is an outcome of 60

'Every kid is so different' says Kristen Bell as her 5-year-old daughter still wears diapers!

May the fourth be with you! : Feeling nostalgic on Star Wars Day, we reminisce some of the most iconic quotes from the blockbuster series

I have watched them care for one another: Angelina Jolie reveals two of her daughter have undergone surgery in the last year

Critics' Choice Awards 2020: Best picture goes to 'Once Upon A Time ... In Hollywood'; Joaquin Phoenix takes home the Best actor award for 'Joker'

Watch: Wajid Khan dedicates 'Hud Hud Dabangg' to his brother Sajid Khan in a throwback viral video from the hospital