Advertisement
HomeFeaturedPeepingMoon Kitchen Diaries: 'I used to chuck my meals out of the window as a child, and now I’m crazy about food,' says Spice Girl Malaika Arora

PeepingMoon Kitchen Diaries: 'I used to chuck my meals out of the window as a child, and now I’m crazy about food,' says Spice Girl Malaika Arora

THANKS to Instagram, her hungry fans during this lockdown are just discovering that in Malaika Arora they have, well, a yummy closet Master Chef. Whetting their appetites with tantalizing pictures and interesting videos that showcase her cooking skills, the lovely actress has been giving her drooling admirers a privileged peek into her “quarantined life”.

“These are the perks of staying at home,” Malaika has said in step-by-step tutorials that take her Instagram fan club from basic ingredients to delicious final product in the kitchen. So far, Malaika has dished out posts on how to make Besan Laddoos, Malabari Vegetable Stew, Walnut Cake and Banana Ice-cream, and Paniyaram which is a savoury from Kerala.

With the lockdown now extending to May 3, you can bet there’s plenty more to come from Malaika’s kitchen. “I love cooking but with my busy schedule, I just don’t get time to pursue my passion,” the Munni Badnam Hui girl told fans. So now that she’s got nothing but time on her hands, and a well-appointed kitchen, Malaika intends to “Cook, clean, workout, stay positive, sleep, introspect, spend time with family, and repeat the same.”

I love to cook! I love cooking for my family and friends but with my busy schedule, I hardly get time to pursue this passion of mine. But with this self isolation upon us, I thought of utilising this time in a constructive and healthy way by cooking some sumptuous and delicious 'Malabari veg stew for the soul'. I have got this recipe from mom @joycearora and a bit from my friend Maunika @cookinacurry who's a lovely cook. Everyone at home simply loves this stew and we are going to have it with some white rice and some delicious gluten-free, vegan chickpea bread that my friend Raveena @iamayogisattva made for me. M in for a lovely treat, I hope you too utilise this time to do something positive and healthy. Stay calm and stay safe! #stayhome#quarantine #covid_19

Funny, she makes no mention of eating, because I know that Malaika is one of Bollywood’s big foodies. I discovered that 20 years ago in 2000. When she was a model and successful VJ who had burst into Bollywood dancing atop a train with Shah Rukh Khan in Dil Se to set men’s hearts racing with Chaiya Chaiya. But Malaika cooled off producers who haunted her door after that with more offers by getting married to Arbaaz Khan. I had lunch with her at a Bandra eatery called Thai Connection on Waterfield Road. We were talking food, naturally, for the UpperCrust – India’s premier food and wine magazine. Malaika, who was gorgeous and fit, admitted to being a fussy child who would chuck her meals out of the window for years. “My mother would want to strangle me! And now I’m so crazy about food, I’m constantly thinking about my next meal,” she said, adding with a chuckle that she was the original Spice Girl because she loved anything spicy! Especially her mother’s South Indian fiery red fish curry made in an earthen pot.

Although a robust eater (her mother is Keralite, her father Punjabi), Malaika has discerning taste buds. She likes coconut-based Thai foods with delicate spices she can identify and the flavour of herbs. Thrice a week, at least, she said she was eating Thai food. I wondered, all that rice, how was she managing to stay in such great shape and look like she had just leaped out of the centerfold of a fashion magazine. “Oh, I workout, it’s simple,” Malaika said. “Aerobics and a dance routine. Lucky me, I’m blessed with a high metabolism. Besides, I don’t drink and smoke.” 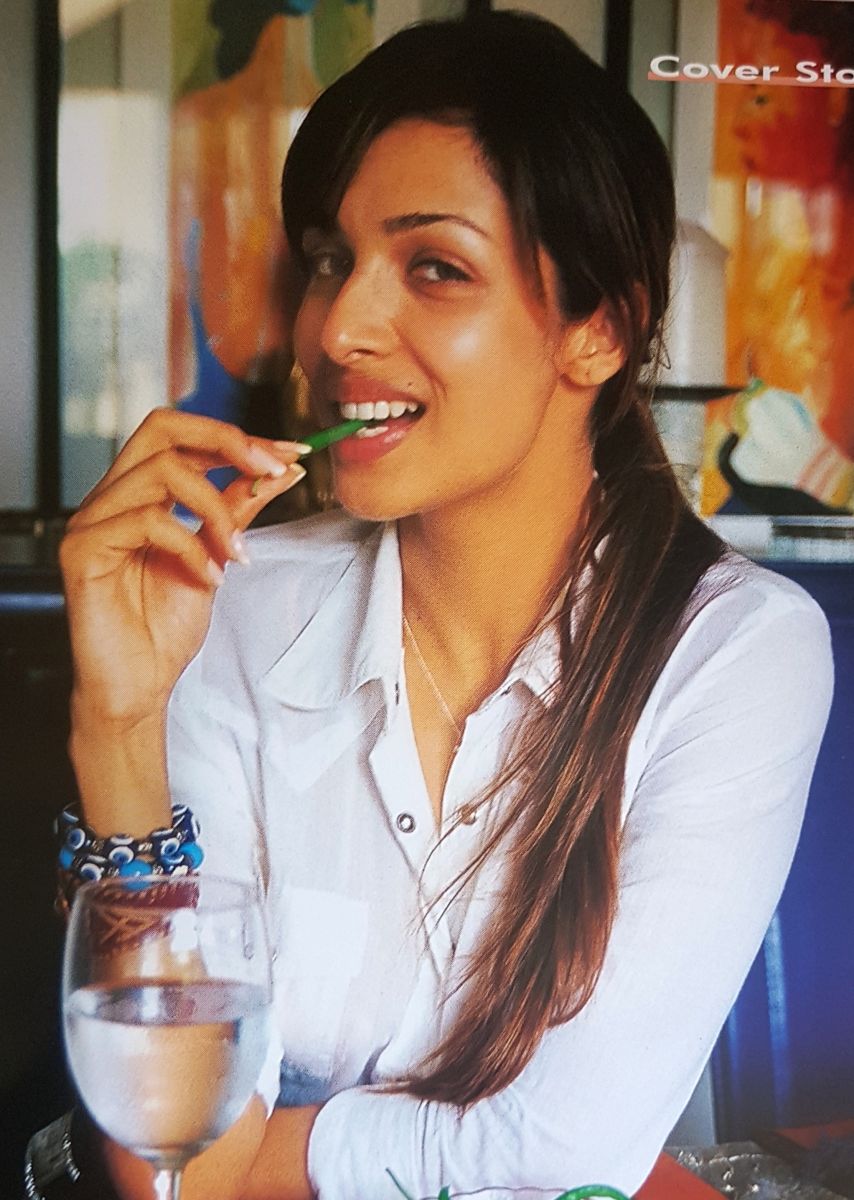 Disbelievingly, I asked, “What, no diet foods?” Malaika laughed mischievously. “No diets, no soups and salads, I need wholesome meals. But no fried stuff, no sweets either. And everything else in moderation. I eat right and I eat on time. Lunch at 1 o’clock. Dinner at 7.30. And I get eight hours of sleep. That’s how I maintain my figure. You take care of the small things and that makes a big difference.”
Fourteen years later, once again for UpperCrust, I found myself discussing food with Malaika. This time at her cozy residence in Bandra one monsoon afternoon. She had invited me for lunch. It was strictly Mughlai. Mutton Biryani, Kheema Pav and Paya. With a rose wine for dessert. She told me she didn’t really enjoy cooking then. “I can’t cook regular stuff. But I can make a great Khausuey and things like that. Somebody has to be really nice to me for me to cook for them,” Malaika said. I wondered what she meant.

But she, and Arbaaz Khan, entertained a lot. And she supervised the cooking. “I don’t physically stand over the gas but I’m in sync with what’s happening in the kitchen,” she revealed. She knew what was available in the market. The maid did the bazaar. The bania sent other stuff over. Arbaaz bought the fruit. Although she didn’t cook much, Malaika was fond of collecting cookery books. She downloaded recipes from the net and then told her cook how she wanted the Grilled Chicken and Pepper Sauce made. “Friends always look forward to having a meal at our home,” she told me. I knew I was lucky. 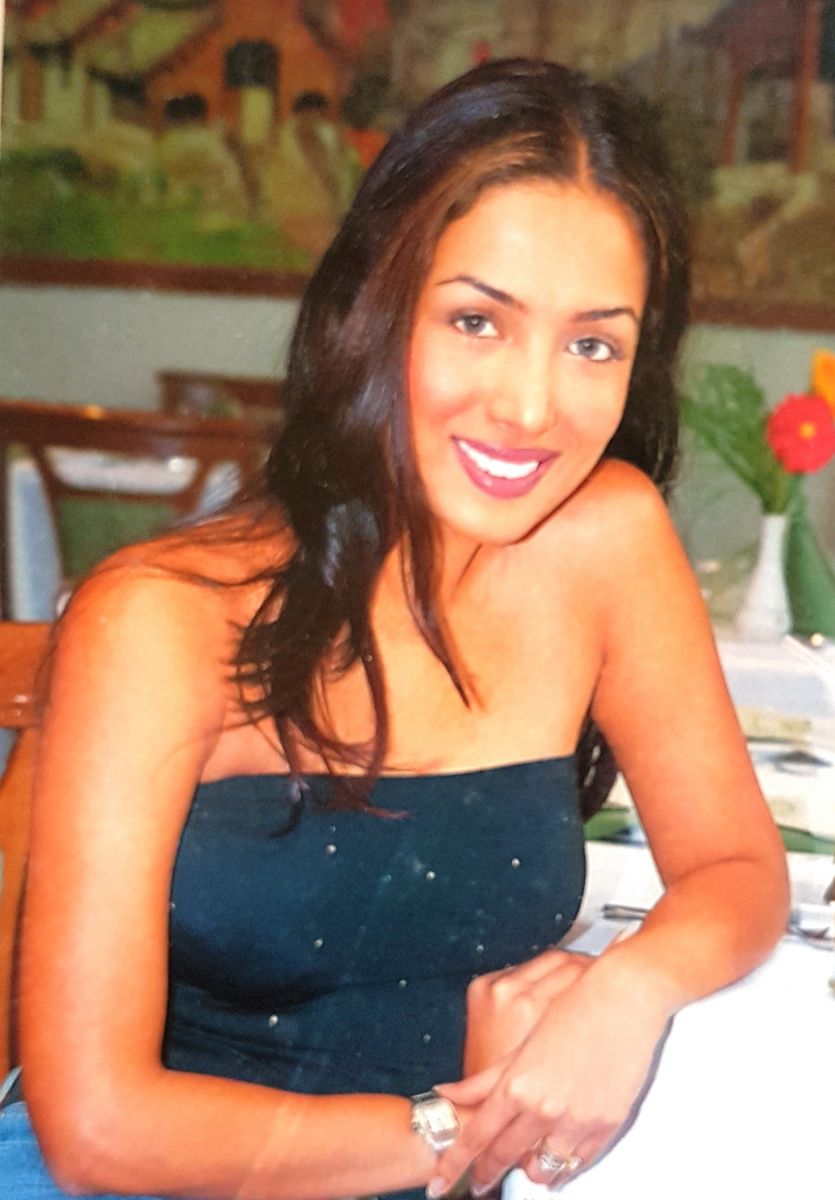