Whether they are attending award functions, promoting their films or attending lavish costume parties, one can see the Bollywood brigade be dressed to the nines, always. Recently, the tinsel town celebrities like Karan Johar, sisters Malaika Arora-Amrita Arora, Rahul Khanna, Neha Dhupia along with husband Angad Bedi and many others attended a theme-based birthday bash of industrialist Arvind Dubash in Jaisalmer.

‘Le Bal Oriental’ also known as the ‘Party of the century’ was the theme of this three-day-long 51st birthday bash thrown by Arvind’s wife and the chief brand officer of the Godrej Group, Tanya Arvind Dubash. Speaking more about the theme, Le Bal Oriental was a lavish and extravagant, masked, costume ball that was held after the Second World War and one of the largest and most lavish social events of the 20th century. Living up to the theme of the party our tinsel town divas and dapper men took the renaissance fashion a notch higher with their vintage dressing. 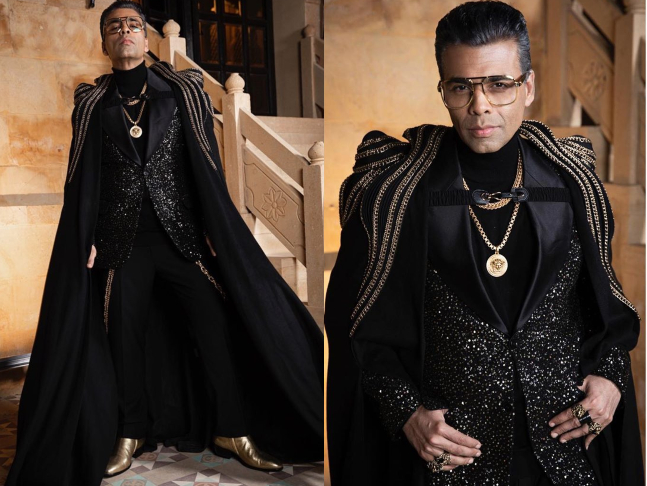 Recommended Read: Vacay vibes and dressed to the nines! Karan Johar and his fashion-forward gang take Doha by a sartorial storm

King of fashion indeed! Karan Johar upped the ante with his top-notch fashion game dressed in ensembles from Gaurav Gupta. Be it his shimmery waistcoat, cape with structured shoulders and rustic chains or those shiny golden boots, everything about this ensemble screamed drama! Layered chains and studded rings from VALLIYAN elevated the look of his cosplay dressing furthermore. 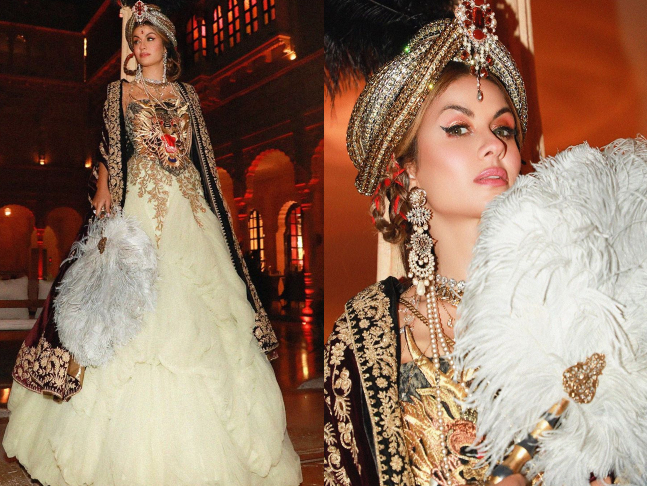 Natasha looked like art in this intricately detailed gown teamed up with an embroidered velvet shawl. Layers of neckpiece, dazzling danglers and an encrusted headgear elevated her vintage look.  Subtle dewy makeup with winged eyes and tinted pink lips along with a braided hairdo added finishing touches to her look. 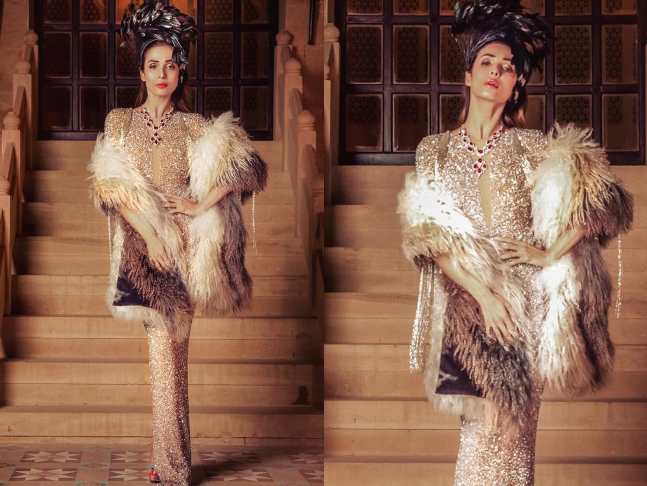 Malaika brought back the vintage glamour in this scintillating gown from label Yousef Al Jasmi. Details like fur and tassels and added ‘glam’ in the glamour of her attire. A ruby-encrusted neckpiece and a feathered headgear took the look of her shimmery attire a notch higher. 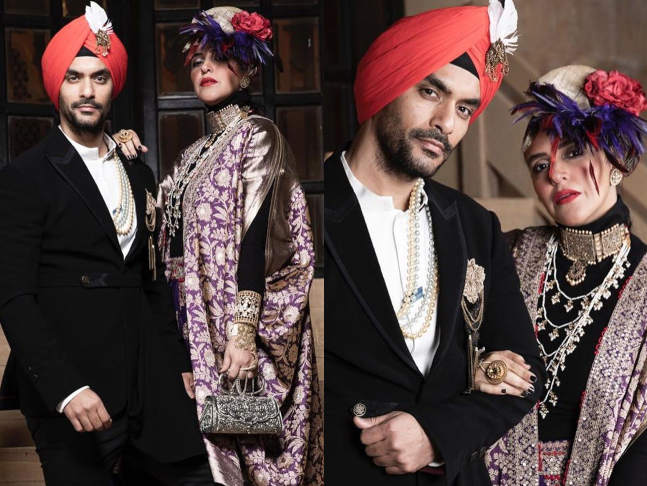 Neha and Angad brought back some old worl glamour with their vintage looks. 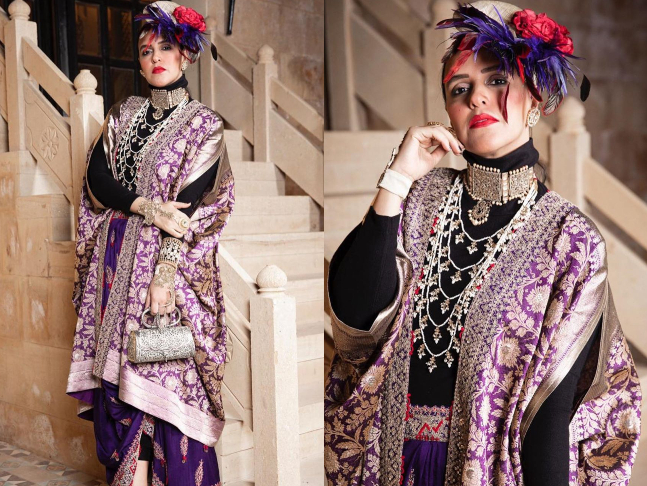 Neha gave the vintage dressing a boho twist dressed in an Anamika Khanna creation. She teamed up her black tank top with purple dhoti pants and a brocade cape. Encrusted choker, layers of neckpiece and delicate hath-phools from Amrapali accentuated the look of her attire. A fancy feathered headgear gave us all the vintage vibes. With blushed cheeks and a striking red pout, she rounded off her look. Angad looked suave in ensembles from Shantanu and Nikhil. A crisp suit, red turban and layers of pearls, we are sold! Rahul looked nothing less than a prince in this encrusted long jacket and pants from label Gaurav Gupta. The green fez sure added to the regality of his look. 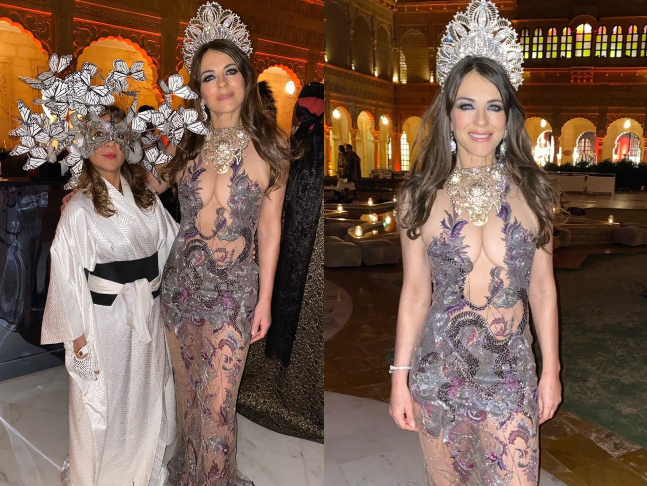 American entrepreneur and model Elizabeth left very little to the imagination in this sheer sequined gown from Julien Macdonald. An encrusted headdress added on to the dazzle of her scintillating attire. With a fresh dewy glam and soft curls, she looked party-ready! 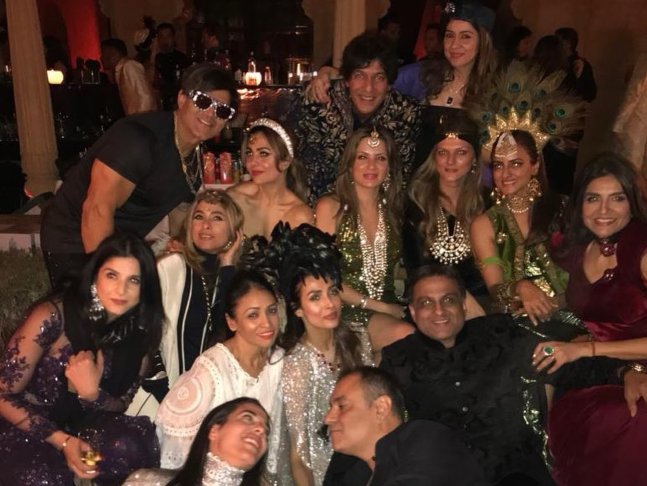 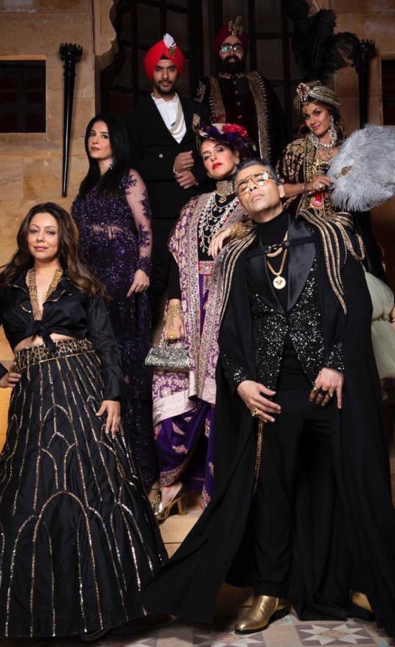