The countdown to Mother's Day 2021 has begun. The entire world will be celebrating the day with their mothers on Sunday, May 9. While television has honoured mothers through various characters and shows, it is time to pay a heartfelt tribute to real-life mothers. When it comes to young mothers, one cannot simply forget how beautifully Ankita Bhargava has been documenting her daughter Mehr Karan Patel's growth on social media.

Now, as Mother's Day is around the corner, Ankita sat down for a heart-to-heart conversation with PeepingMoon.com. During the interview, the actress spoke about being trolled for marrying Karan Patel just because she wasn't as "popular" as him. Ankita further said that the trolling stayed back in her mind and that's why she decided to not introduce her daughter Mehr to the world on social media. However, one fine day, Karan shared a picture with his princess and fans got to see how adorable their little one is. Recommended Read: Karan is besotted with Mehr, he thanks me everyday for giving birth to her: Ankita Bhargava

Talking about covering Mehr's face with an emoji initially, Ankita said, "In my defence, even Kareena Kapoor Khan uses an emoticon to cover the face of her second son. I'm so happy about that (laughs). Ever since I was married to Karan, I was trolled left right and centre for no apparent fault of mine. Yes, I do come from a family of actors but middle class. Also, I wasn't an extremely popular actor. I was just doing my bit in the industry but I wasn't as popular as Karan, in comparison. People took it that badly and were expecting him to marry an equally popular actor. I do not understand when it comes to marriage, popularity is what sort of measurement. But for people, it was more important that I wasn't as popular as Karan. I was brutally trolled." 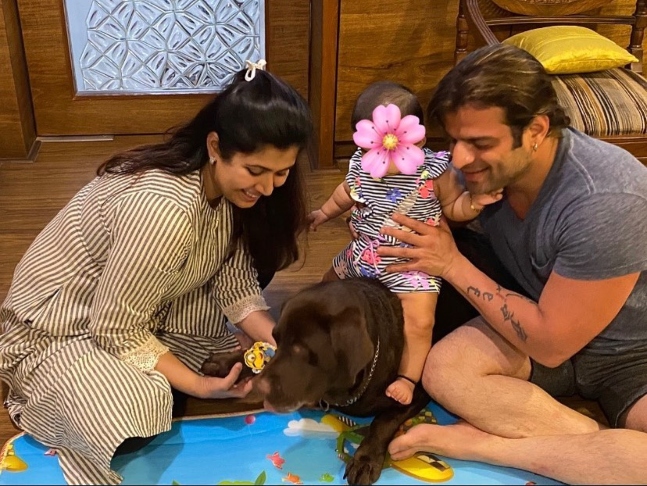 Ankita further said that she wasn't ready to listen, read and know that people thought ill for Mehr. Though she wanted her well-wishers to see Mehr growing up, she didn't want unnecessary judgements to be passed for her. "When that happened, a big part of me wanted to restrict my life and not make it public. But it is just impossible with the media around us etc. After what I have been through in life, I wasn't ready to listen to any trolling against my offspring ever. I don't want to read, see or know that people are wishing ill for her or talking bad about her for her looks or whatever. I wanted to share it with my well-wishers, loved ones that my daughter is growing up well and is happy but I didn't want anybody to judge her. it is just not right," Ankita added. Speaking about the "icebreaker" moment, the actress shared, "Karan one day posts her picture. We were sitting in Sun & Sand for dinner. My partner (who works with her on her clothing line) called me and revealed it. After opening Instagram, I saw my timeline flooded with the picture featuring Karan and Mehr's half-face. My heart skipped a beat. I told Karan, "You posted a picture and didn't even tell me, forget asking." He said, "Haan, so you also post her pictures." I think I needed that icebreaker otherwise I had planned to reveal her face in 2040."