Advertisement
HomeBOLLYWOODEXCLUSIVEPeepingMoon Exclusive: Sanjay Leela Bhansali is not directing Kriti Sanon and Aditya Roy Kapur in his next!

Speculations have been ripe since the last few weeks that ace filmmaker Sanjay Leela Bhansali is working with Kriti Sanon and Aditya Roy Kapur in his next directorial. While this news has brought some excitement among their fans, the truth seems far from it. Sources close to Bhansali have clarified that Kriti and Aditya are not doing a film with the Padmaavat director as rumoured in the media. "We don’t know where it came from. "There's nothing happening with Kriti Sanon and Aditya Roy Kapur at Bhansali Productions," the source has stated while refuting the casting rumours.

According to industry sources, Sanjay Leela Bhansali is completely occupied with his Netflix series Heeramandi at this moment and will not start anything else until it’s finished. Although he is directing only two episodes of the period drama series, he is unconditionally involved and overseeing every aspect of the project himself. "Heeramandi will keep him busy throughout this year, and only after finishing it will he head to Baiju Bawra, which stars Alia Bhatt and Ranveer Singh in the lead. Bhansali is bound up with adapting Vijay Bhatt’s 1952 musical historical in his trademark larger-than-life style and is currently developing the script with his regular collaborator Prakash Kapadia, who’s been writing Bhansali’s films right from Devdas, Black, Sawariya, Bajirao Mastani, Padmaavat to the recent Gangubai Kathiawadi. They have completed the first draft of the script and will resume writing once Bhansali returns from the Heeramandi sets. The script is expected to be ready by the end of the year, and if everything goes well, the film will get into production in the first half of 2023, "the source told us. 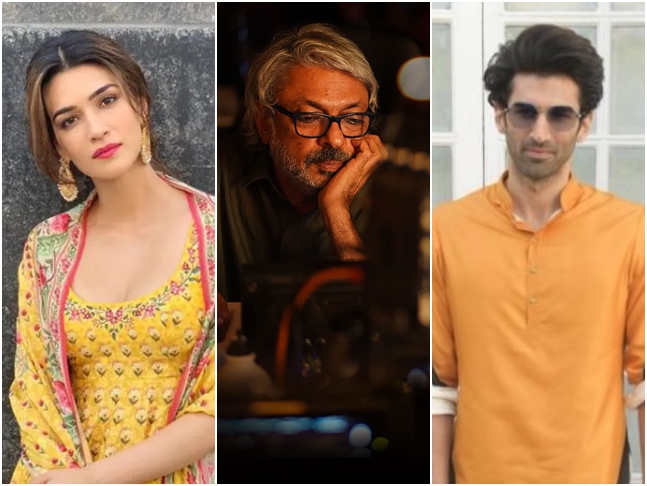 Although Bhansali is committed to Baiju Bawra post-Heeramandi, the filmmaker is simultaneously toying with other film ideas as well, and no one knows which film he will end up making next. "Whatever Bhansali is directing next, it’s not with Aditya Roy Kapur and Kriti Sanon for sure. Their casting news is completely baseless. They are in talks for the remake of Rehna Hai Tere Dil Mein, and not for a Bhansali film," the source further clarified, adding that Bhansali has also initiated talks with Kartik Aaryan for a new project, but that’s at a very early stage at this moment.

Meanwhile, Sanjay Leela Bhansali has started shooting for his Netflix saga, Heeramandi, in Mumbai. The period drama series is set in the pre-Independent, undivided India, in the Heeramandi area of Lahore, and explores the themes of love, betrayal, succession, and politics in the "kothas", or bordellos, of Heera Mandi through three generations of courtesans. It’s one of the most expensive Indian web series coming out of Netflix and features a vast cast that includes Sonakshi Sinha, Aditi Rao Hydari, Manisha Koirala, Richa Chadha, Sharmin Segal, Siddharth Gupta, and some more yet-to-be-revealed surprising names in pivotal roles. Co-directed by Vibhu Puri and Mitakshara Kumar, the show promises to intrigue audiences and transport them into a world of incredible grandeur, beauty, and harshness at the same time.