Advertisement
HomeBOLLYWOODEXCLUSIVEPeepingMoon Exclusive: Ranveer Singh deserves attention for what he brings to '83, I don't fear being in the shadows for that reason- Dhairya Karwa

PeepingMoon Exclusive: Ranveer Singh deserves attention for what he brings to '83, I don't fear being in the shadows for that reason- Dhairya Karwa

After a long delay due to the COVID-19 pandemic, '83 will release in theatres on December 24 (2D and 3D) in Hindi, Tamil, Telugu, Kannada and Malayalam. As the date is inching closer, PeepingMoon.com got in touch with Dhairya Karwa, the actor who plays the role of Ravi Shashtri, the former head coach of the India national cricket team. Dhairya made his acting debut in Uri: The Surgical Strike (2019) as a Para SF officer named Captain Sartaj Singh Chandhok. Since then, there is no looking back for him.

Bagging a meaty role in '83, Dhairya called the film a lifetime opportunity. The actor spoke about perfecting Ravi Shastri's iconic Chapati Shot and his bowling techniques despite being a right-hand batsman and right-hand bowler. After '83, Dhairya will be seen with Deepika Padukone, Ananya Panday and Siddhant Chaturvedi in Shakun Batra's relationship drama. Talking about it, he said the audience should expect the unexpected. '83 is getting a solo theatrical release after waiting for almost 2 years. Can we say it is a win-win situation for the entire team?

It is a win-win situation not just for the team but the audience too. They will be watching something spectacular on the big screen. '83 is made and deserves to be viewed on the silver screen. After some time when the film comes out on the OTT, you just compare both the experiences. They will be different.

Why do you feel the story of Kapil's Devils needs to be retold now?

The story of '83 is about human triumph, belief and resilience. It is an evergreen story and can be told even 100 years later without losing its relevance. Every day we are fighting for self-belief and overcoming hurdles. When India won at the 1983 World Cup, it was an important event and changed the face of cricket for Asians and the psychology of Indians. We were proud of the Indian national cricket team's win and what they achieved. It just proved that we are no less.

Cricket and films are like religions in India. It is like you have already won half the battle, isn’t it?

Yes, I totally agree and you can include me in that too (laughs).

You play the role of Ravi Shastri. When were you approached for the film?

It was either January or February of 2018 when I auditioned for '83. I have been associated with the film for 4 years now.

Ravi Shastri is known for his larger-than-life personality. How did you approach the character?

Yes, he is a larger-than-life personality and an iconic one too. Unfortunately, I didn’t get the opportunity to meet him personally but I took inputs from his team members who were guiding us throughout. When the 1983 World Cup took place, Mr Shastri was just 21. To be representing your country at such a big event and having all that confidence just at the age of 21, I was curious to know what his psyche was. I got to know from his teammates that his passion for cricket started from his school days. He was the captain of his school team and that’s how his passion grew. See, some traits are inherent in you. The flamboyance and confidence, as I heard from others, was inherent in him.

Did you train in his iconic Chapati Shot?

Oh, I did! It took us eight months to complete the cricket training. More than the Chapati Shot, the bowling was challenging for me. Mr Shastri is a right-arm batsman and a left-arm bowler whereas I am a right-arm batsman and a right-arm bowler. I had to learn to do it with my left arm. The Chapati Shot did take some effort but not as much as the bowling part. Also, Mr Shastri had a distinctive bowling style. For all the actors, recording tapes were available and so, it was very important for us to watch, learn and put in the efforts to justify the legends. 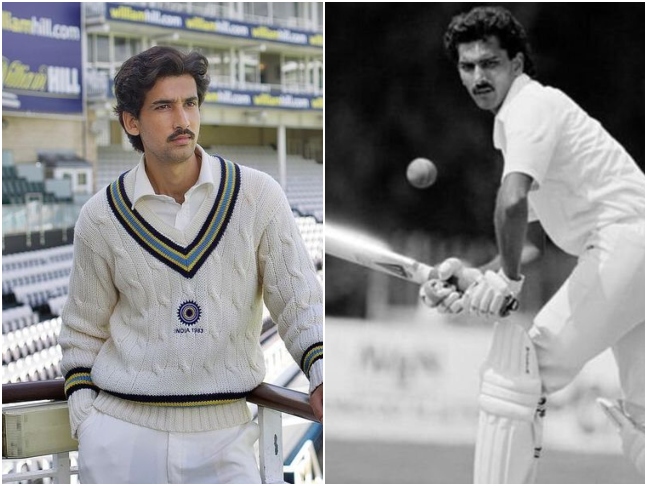 '83 is based on a true event. Did the team follow the exact chronology or took a certain degree of creative liberty?

No. '83 is all about what happened within the team which not many people know. The story starts with an underdog team who didn't get an equal chance and then, the same team lifts the cup. It is about what happened behind the scenes and how these 14 men did the unthinkable. I think the generations, who watched the match live, also want to know about things that were not televised. Also, a lot of the World Cup wasn't recorded. Like Kapil Dev's inning wasn't recorded by the BBC. Now, for all cricket lovers, it will be a different experience to witness the moment.

'83 is an ensemble film headlined by Ranveer Singh. Do you think standing out in an army of actors will be a challenge? Do you fear not getting enough limelight?

Not at all. In fact, on the contrary to that, I feel fortunate to be a part of this film. I got a chance to play an iconic and legendary cricketer. '83 is about a team led by Kapil Dev. Being the captain of the team, he had an important role in the victory. What Ranveer brings to the film, he deserves to get the attention. He is headlining it and there is no doubt about that but he is doing it because of the character he is playing and not because he is a superstar. I don’t fear being in the shadows because there is an army of actors. It is a once in a lifetime opportunity for me.

You made your Bollywood debut with Uri: The Surgical Strike. Do you credit the film for putting up on the map and for giving you a chance to compete for better roles?

Definitely, there are no two thoughts about it. I was fortunate to start my career with a successful film, a great story and with a great human being and actor Vicky Kaushal. It did give my career a strong foundation. The experience I got helped me gain confidence and that’s how its works. Hopefully, in my career trajectory, I keep growing with every part.

After '83, you have a film with Deepika Padukone, Ananya Panday and Siddhant Chaturvedi. That’s a big film too. What can the audience expect from it?

As you said, it is a big film with big names attached to it. I am grateful to be a part of another great story. The audience should expect the unexpected. Whatever you see, there will be more to it. You will be pleasantly surprised by it. The theme of the film is you can plan for your life but life will have other plans too. Sometimes, life’s plans turn out to be better than yours.