Manvendra Singh Gohil, the crown prince of one of India's oldest royal families came out of the closet on Oprah Winfrey show in 2007. He did not have it easy, after declaring that he was gay. He runs a charity now, The Lakshya Trust, which works with the LGBT community. Now, the prince watched filmmaker Ram Kamal Mukherjee's ZEE5 film A Tribute to Rituparno Ghosh: Season's Greetings and sent an open letter to the director. The 47-minute Hindi feature marks the comeback of Bollywood star Celina Jaitly Haag post her marriage and motherhood. The film also stars theatre thespian Lillette Dubey and debutant Azhar Khan in the lead.

The letter read, "Dear Ram Kamal, When you announce a film, that's a tribute to Rituparno Ghosh, then you sign Celina Jaitly, who worked for LGBTQIA cause for past two decades, and also have UN Free and Equal as social cause partner, you expect the film to be a mouthpiece about the cause. There were high chances of director slipping off his boots, making a huge mess of telling a story that has often being misinterpreted in Hindi cinema.
But when I watched Ram Kamal Mukherjee's Season's Greetings, I was happy! It gave me immense joy to see that he is probably the first filmmaker to not differentiate humans on the basis of their sexual preference. The detailing is so impeccable and yet subtle that it reminds me of French and Hollywood cinema from the past.
I see this film as a road film, though there is barely any outdoor scene. The characters are on a road to explore many aspects of life.
From Romita to Suchitra, from Usmaan to Chapala, everyone is on a journey of their own.
They are some sort of seekers, of love and acceptance. I could relate to many scenes, dialogues and emotions that plays like Mozart, and pulls the right chord, taking us all to the crescendo! The climax is actually the beginning of a new seasons. The sound of rain, the whip of thunderbolt and the silence of the night, makes for a music narrative of India's first LGBTQIA film that doesn't show anything about sex! I remember in Arekti Premer Galpo, Rituparno Ghosh played a gay filmmaker and he said something beautiful to a journalist. He said, "Why do you only think of sex when you think of homosexual couple? Would you think the same way otherwise?"  I guess, that's where Ram Kamal pays his honest tribute to Rituparno." 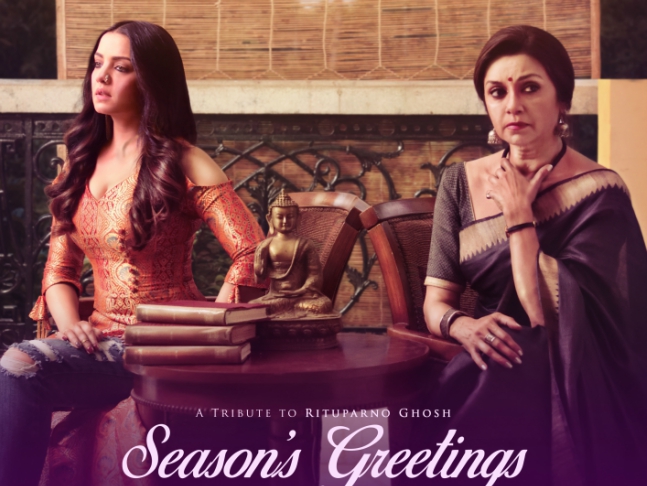 Set in Kolkata, Season's Greetings revolves around a mother and daughter relationship. The first look of the film was revealed by Bollywood legend Amitabh Bachchan on the 56th birth anniversary of late Rituparno Ghosh on August 31, 2019. Produced by Aritra Das and Shailendra Kumar under the banner of Assorted Motion Pictures and SS1 Entertainment respectively, the film also marks the debut of Jaan Kumar Sanu, son of Bollywood playback singer Kumar Sanu and also features Sayani Palit. The film has music by Shailendra Sayanti.