PeepingMoon Exclusive! Was Boney Kapoor pitching to remake ‘Kaithi’ for Arjun Kapoor before Ajay Devgn got the Tamil’s film’s rights?

Ajay Devgn, who is still heroically riding the high of his January period war drama Tanhaji: The Unsung Warrior, has announced his involvement in the Hindi remake of the Tamil action thriller Kaithi. Ajay will play the lead role made famous in the original by Tamil superstar Karthi (Karthik Sivakumar). His Ajay Devgn Ffilms (ADF) will also co-produce Kaithi along with Reliance Entertainment and Dream Warrior Pictures of Chennai, the original producer. The release date of the film has already been announced as February 12, 2021.

Buzz is that other Bollywood production houses were already pitching to remake Kaithi before Ajay and Reliance bagged the Tamil film’s rights. Reportedly in the running was Boney Kapoor who is said to have wanted Kaithi for his son Arjun Kapoor. Sajid Nadiadwala was also believed to have flirted with the idea of taking up the project. But sources from Kollywood report that Dream Warrior Pictures was firmly of the opinion that only an actor like Ajay could carry off Karthi’s role of an ex-convict traveling to meet his daughter for the first time and gets involved in an operation between drug lords and the police. 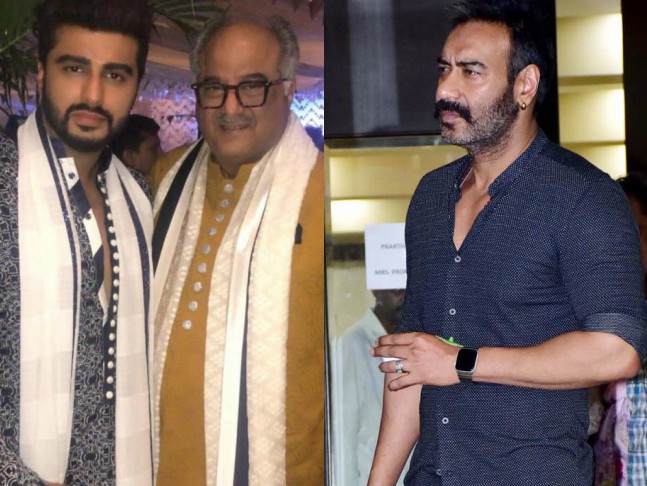 Recommended Read:  Confirmed! Ajay Devgn to star in the official Hindi remake of the Tamil action-thriller 'Kaithi'; film to release on THIS date

It is not known whether Boney’s BSK Network and Entertainment Pvt. Ltd. was in any stage of talks with Dream Warrior Pictures. But speculation on that has now died a natural death with Ajay and Reliance taking up Kaithi with the original Chennai-based production house. Rumours are that filmmaker Rajkumar Santoshi is keen on directing the film but news from the South is that Lokesh Kanagaraj, the writer-director of the Tamil film, might make his Bollywood debut film with the Ajay Devgn starrer. Meanwhile, Boney reportedly has another production house called Bayview Projects that has acquired the remake rights of the Tamil super hit Comali (2019) and Arjun Kapoor will be reprising Tamil actor Jayam Ravi’s role in the Hindi version.