Advertisement
HomeBOLLYWOODEXCLUSIVEExclusive: 'When I looked in the mirror, I would see Savitribai Malusare,' says Kajol ahead of Tanhaji: The Unsung Warrior's release

Tanhaji: The Unsung Warrior is about to release and Kajol, who otherwise is not fond of doing press interviews, is enthusiastically promoting the film alongside husband Ajay Devgn. "One evolves with time. It's the need of the hour, to raise awareness about your film, especially something like Tanhaji, a story which is not known to many," the actress explains.

Born in a Bengali-Marathi family, the actress will be essaying the role of a Maharashtrian for the first time in her 28-year long career. Kajol will be seen as Savitribai Malusare, subedar Tanhaji's wife, in the historic drama. "It was Ajay (Devgn) who convinced me. He came to me and told that we are doing this film and mentioned Savitribai’s character. Ajay said, 'You are the only one who can do it and if you come on board I will develop the character even further and make it stronger.' I liked what Savitri has to say in the film but more than anything I got very excited about playing a Maharashtrian for the first time," admits the actress to PeepingMoon.com.

Q. What prompted your decision? The fact that it was a home production opposite the husband or the scope of the role itself?

A. Partly that it's a home production. I knew that because it was a home production, the quality that would go into it, the way it would be shot, how the scenes would be written and my character will be taken care of. All three characters in the film are clear cut. Saif (Ali Khan) is a bad guy with no apologizes. He is pure black and is not the one who is saving a dying woman at the end of the film redeeming himself. Ajay is the heroic character and so is Savitri. There aren’t questions about who she is and what she is, what she is contributing and what not. I loved the relationship between the husband and wife. She also knows that she is Tanhaji’s biggest support. There is always an unspoken conversation between them and a slight thread of tension. Q. You are an avid reader. Where did you find info on Savitribai because the history books have little or nothing?

A. Om Raut, the film's director was the one who researched the whole thing. Then we have taken a little bit of cinematic liberty according to that era while being historically correct as to what the house should like and how the people should look and talk. And so on, we have built the character.

Q. Given little is known about Tanhaji’s wife, did that give Ajay artistic license and cinematic liberty to expand on the role?

A. As actors we always bring something of our own. Say, if the look is concerned, how the hair will look, how the will saree be draped - that’s where we come into it. We add our inputs and construct a character.

Q. Why are you described as the reason behind Tanhaji’s strength and courage?

A. As I said previously, he (Tanhaji) knows. It is an undercurrent in the film. Even she (Savitribai) knows she is his biggest support and he tells her also that, ‘I’ll be nowhere without you’ and in the nicest way. That’s where it comes from. Whether she is there holding the sword or not, she is always there for him. There is an absolute faith she has in him as a person, fighter, warrior and he needs her to believe in him.

Q. Your mother is Maharashtrian, did that help getting into Savitribai’s character and clothes easier? Did you influence the look?

A. Definitely. I have seen my mother, grandmother, great grandmother wearing a nauvvari. We had a maid in our house who wore nauvvari all her life and she was there since the time my mother was a kid. She died at the age of 85. So I have known what it looked like on normal people. And I have always loved Raja Ravi Verma paintings, I knew Savitribai will look something like this in my heart. Every morning I used to take 2 to 2.5 hours to get ready. I tried hard to drape the saree but couldn’t get it right. An elderly 75-year-old woman would come and drape it, that’s when I used to understand where I was going wrong. But I would lose track of it in the fourth or fifth thing she did (laughs). This woman only draped nauvvari for old Marathi films, Marathi plays, TV serials. She draped my saree so beautifully. When you wear a nauvvari, it is weird but your body language changes. When you are holding the padar on your head, you turn into somebody else. Each time I looked at myself in the mirror, I would not see myself but Savitribai Malusare. It was like a complete makeover, seeing a new person created in front of you. I believe less is more and my simplistic look speak volumes. 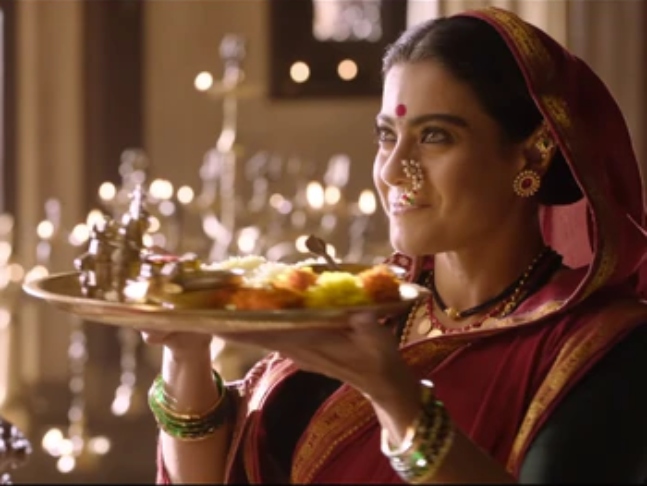 Q. Does it feel like “work” when shooting with Ajay or “ghar ki baat”?

A. It's definitely ghar ki baat. If he has to keep me for 2 hours extra, he would be like ‘Baby you have to stay’, ‘Baby we have to finish this naa’. He used to be like, 'It9's our film'.

Q. Are your kids amused, thrilled, excited, awkward that Mom and Dad are acting together again?

A. I think they are none of the above. Because I don’t think it really hit them that we have taken this break. They are constantly watching us together. Right now they are deciding whether it's my film or his film. Then they will decide who is better and who is not. Ajay says Yug is excited that I am performing action and Nysa is yet to figure out. She will watch the film and give her word. If you ask her now, she will be like ‘I don’t know. I’ll see the film and say’. She is very critical. Fortunately, for me, she doesn’t like the films I do but she likes my work. Like she thinks Kabhi Khushi Kabhie Gham is a cool film but she doesn’t like me crying so much. Her constant complaint is, ‘Why do you make such films where there is so much crying. Why don’t you make happy films like papa? See Papa is doing Golmaal naa. Be like papa, do films like him!'

A. Time flies, hai na! We really didn’t realize what impact the film will have back then. But with so many wishes pouring in, people remembering Anjali, I guess 100% credit for my character goes to Karan (Johar) because he was so good. Not many know, but he enacted everything for me, the way Anjali walks, moves and so on. It's his creation. 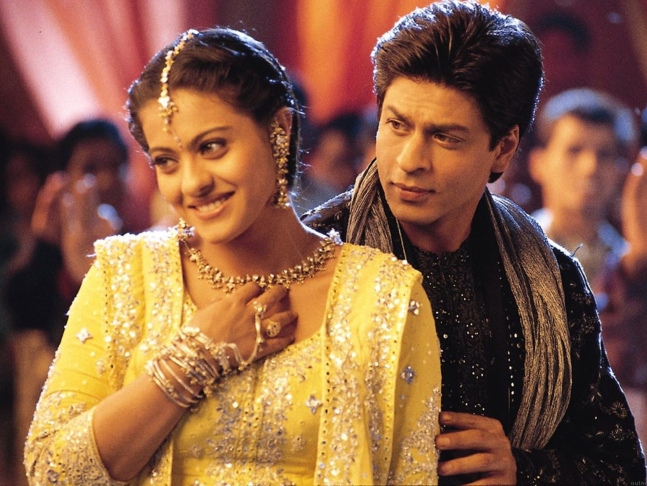 Q. Bollywood period films always run into some objection. But surely filmmakers do a lot of research to stay on the right side of history. Why do we protest? Simply because we can?

A. Yes, I think they do. I think they like to protest as a way of gaining publicity and as a way of being heard. This is not for those who are genuinely doing it. Honestly, I think we have worked very hard to be as historically correct as possible. But at the same time, we have taken some cinematic liberties because at the end of the day we are making a film for the audience to watch and enjoy. It's not a documentary. It is meant to be episodic. That’s why we made it in 3D and we are very happy to say that the VFX of the film is as good as an international standard film.

Q. Apart from working with Ajay again, you are also returning to screen with Saif Ali Khan. You made three films together in the 1990s. How was it working with him again? Have you two been friends over the years?

A. I haven’t worked with him in the film because I have no scenes with him. The characters don’t meet. Unfortunately, we couldn’t take that much cinematic liberty (laughs). That was too much for us to do. But he is amazing in the film and I have seen parts of it. I told him that at the Delhi press conference. Someone came to him and asked, 'Sir you have done such a fabulous character in the film. Are you still in character?’ Saif was confused at that moment. He didn’t know how to answer and I said, ‘L0et me answer for him’. I told him he has such a fabulous role in the film but he can’t help but be as evil as possible. Q. Apart from Savitribai Malusare, who are the women in our period films that have impressed you earlier? Any of these characters you wished you could have played?

A. No, I don’t watch films like this to say, ‘I would love to do that’. When I watch a film, I am a pure spectator. Films make me emote. I'm a fabulous frontbencher audience.

Q. Is there a certain role in your mind that you would love to do at this junction of your career?

A. I would love to do a Mamma Mia. Too much fun. Comedy is one genre I have never done. I am hoping something comes my way.