Advertisement
HomeBOLLYWOODENTERTAINMENT NEWSKangana Ranaut heaps praises on Sidharth Malhotra's and Kiara Advani's 'Shershaah', says 'it was a big responsibility and you all excelled'

Kangana Ranaut heaps praises on Sidharth Malhotra's and Kiara Advani's 'Shershaah', says 'it was a big responsibility and you all excelled'

Actress Kangana Ranaut has heaped praises on the film 'Shershaah' which starred Sidharth Malhotra and Kiara Advani in the lead roles. Directed by Vishnu Varadhan, the film release on Amazon Prime Video on August 12.

Kangana took to her Instagram story on Thursday, where she posted a picture of Param Vir Chakra awardee Captain Vikram Batra, who attained martyrdom in the 1999 Kargil War. She wrote, "National hero Vikram Batra was a Himachali boy from Palampur, very popular and loved soldier. When the tragedy happened, news spread like wildfire in Himachal, it slid through our hearts. As a kid, I remember being tormented for days." 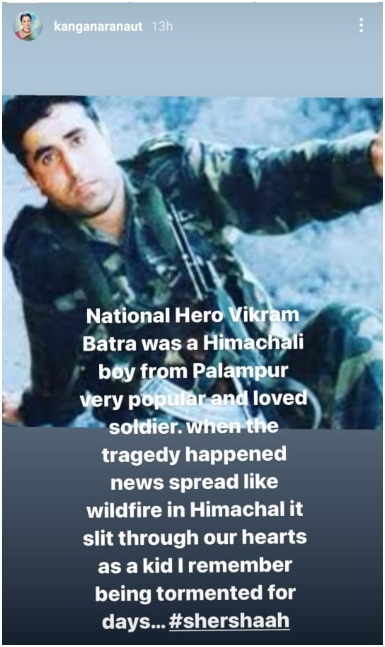 Kangana then shared a picture of actor Sidharth Malhotra, who plays Captain Vikram Batra in Shershaah, which is co-produced by Karan's Dharma Productions.
She wrote, "Sharing a picture of Sidharth Malhotra from the film. What a glorious tribute @sidmalhotra. Congratulations to entire team. It was a big responsibility and you all excelled #shershaah." 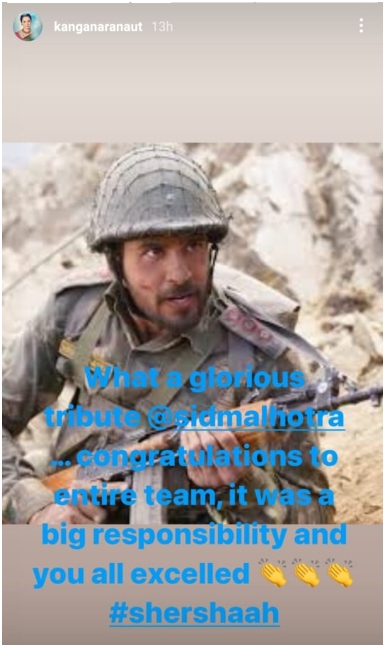