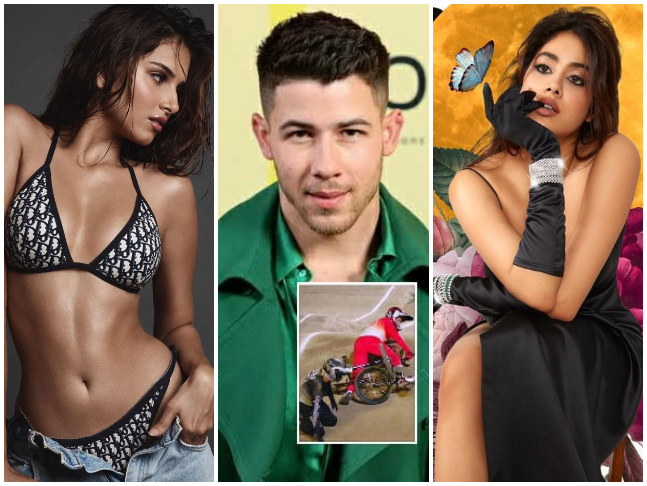 Our Bollywood celebs are lighting up the internet with their social media posts. Their photos and videos are going viral on the internet. Janhvi Kapoor, Tara Sutaria, Priyanka Chopra Jonas & Nick Jonas and Anushka Sharma are keeping their fans elated with their trending social media shenanigans. Read on for more details.

Janhvi Kapoor drops a sizzling photo from her photoshoot

Janhvi Kapoor looked incredibly chic as she posed in a black gown with a thigh-high slit and heels. She completed her look with opera gloves and rhinestone cuffs. The background was illustrated by a psychedelic pattern and was shared by photographer Sasha Jairam.

A gif of Nick Jonas falling from his bike and getting a broken rib during the third round of #OlympicDreams.

Recently, Priyanka Chopra Jonas’ husband Nick Jonas was injured in a bike accident and cracked his rib. Now, almost over a month after being discharged, a video of Nick’s bike accident and rib injury has found its way to the web. In a recent NBC's Olympic Dreams Featuring the Jonas Brothers, a pre-taped event showed Nick's fall from the bike. The video saw Nick competing with his older brothers Joe and Kevin in different sports including track and field, gymnastics, and BMX biking. It was during the biking part that Nick took a turn and toppled, hitting the ground very hard. His brothers were also seen colliding into him. Anushka Sharma has shared new pictures from her United Kingdom trip as she is there to support husband Virat Kohli and Team India. Anushka shared pristine and beautiful images from Durham showing an empty valley, narrow lanes surrounded by old buildings and a stream surrounded by luscious green trees.

A post shared by Bobby Deol reasons to love (@bobbydeol_100reasonstolove)

Abhay Deol and Bobby Deol shared a fan page's post that showed the two cousin's collage side-by-side and asked them to feature in a film together. While Bobby and Sunny Deol have featured in quite a few films together, Abhay has never teamed up with his elder cousins. The fan page wrote, "Dear Bobby and Yo Abhay! Just look at you guys! Don’t you think we should see you both in a film together? Both of you, so charismatic and unique talents! Pretty please ! Think about it! Thanks in advance, okay? @iambobbydeol @abhaydeol #bobbydeol #abhaydeol #brothers #cousins #twinning."