‘Let people mourn in peace,’ requests Kriti Sanon to paparazzi after Dilip Kumar’s funeral, says ‘give the family their privacy’

Legendary actor Dilip Kumar passed away yesterday, bringing the golden era of Hindi cinema to an end. He was 98 years old. His demise was not only mourned by his fans, family members and fraternity but also top Indian political leaders. The actor was buried with full state honours and the video and pictures of his mortal remains along with his grieving widow actress Saira Banu was covered by Indian media.

However, Kriti Sanon has taken offence at all the media coverage of the funeral and urged the paparazzi to show some restraint and respect for family members so that they can grieve their loss in peace instead of having flashbulbs going off in their face nineteen-to-a-dozen. Taking to her Instagram story she wrote a ‘humble request’ for the photogs to not cover celeb funerals. 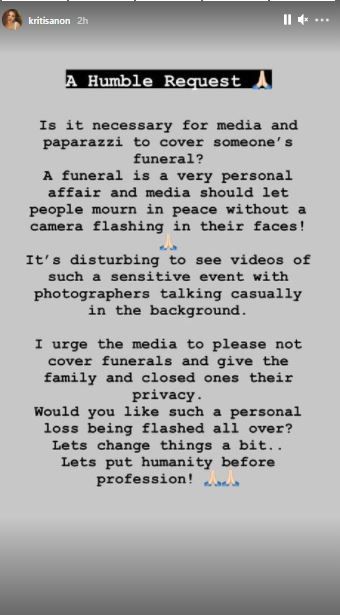 She wrote, “Is it necessary for media and paparazzi to cover someone's funeral? A funeral is a very personal affair and media should let people mourn in peace without the cameras flashing in their faces. It's disturbing to see videos of such a sensitive event with photographers talking casually in the background. I urge media to please not cover funerals and give the family and close ones their privacy. Would you like such a personal loss be flashed all over? Let's change things a bit. Let's put humanity before profession."

This is not the first time that a celeb has written about showing some decency for the family who has lost their loved ones. Since last year, when many celebs passed away due to COVID-19 or several other reasons, the film fraternity has come forward to ask paparazzi to not hound the family members for pictures, videos and bytes.