Indian filmmaker-actor Ajay Devgn once again makes headlines as he becomes the most searched Indian actor on YouTube in the last 12 months. According to Google Trends, many Indian actors are searched via them by millions of people every day. And in this list, our very own Tanhaji has been ranked at the top in the last year. Other Indian superstars like Salman Khan, Allu Arjun, Amitabh Bachchan and Thalapathy Vijay also featured on this list.

The love the audience harbours for their Singham is commendable. He also featured in another survey as one of the finest actors of the current generation courtesy -  his role as the young revolutionary, Bhagat Singh. In his three-decade spanning career, Devgn has made a brand value for himself based on some award-winning acting roles (he's the winner of two National Awards) and a happy mix of commercial films. 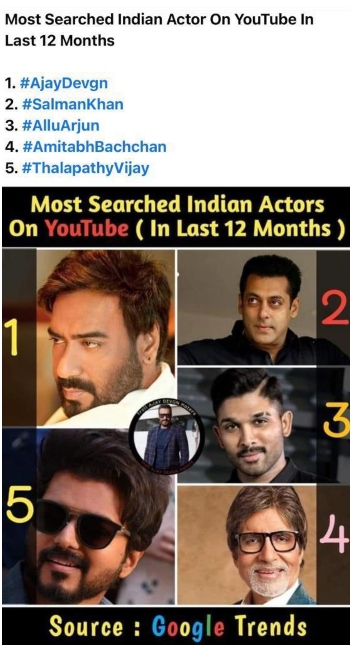 From the release of his movie Tanhaji: The Unsung Warrior in January 2020; a film that went on to cross the worldwide box office figure of 300 cr+(gross), to becoming the producer of OTT films like Tribhanga and The Big Bull, Ajay's banner Ajay Devgn FFilms has also become a force to reckon with. Supporting quality above all else, Devgn continues to strive in giving the audience films with good stories.

On the personal side, Ajay has worked as a true warrior with his continued efforts in being there at the frontline doing his bit for those afflicted in the current Pandemic.  Be it putting up vaccination camps or setting up an ICU unit, the actor is constantly there on ground zero, trying his level best 'to make a difference'. Perhaps this is why he has been featured as the number one searched Indian actor on YouTube.