Advertisement
HomeBOLLYWOODENTERTAINMENT NEWSArjun Kapoor calls sister Anshula the ‘ace up his sleeve’ as he gets her initials inked; Janhvi Kapoor’s goofy video with her gang will make you go LOL

Arjun Kapoor calls sister Anshula the ‘ace up his sleeve’ as he gets her initials inked; Janhvi Kapoor’s goofy video with her gang will make you go LOL

Siblings Arjun Kapoor, Anshula Kapoor and Janhvi Kapoor have got their social media game on point by sharing some adorable love for each other. A day after Father’s Day when the trio and Khushi Kapoor met to celebrate and wish father Boney Kapoor, they have got their Instagrams lit by new posts. Read more below:

Arjun Kapoor has never shied away from showing his love for younger sister Anshula Kapoor. The actor got a tattoo that spelled the letter ‘A’ with playing cards’ spade. He captioned the video as, “She is the Ace up my sleeve @anshulakapoor & I, intertwined forever in life & also by the letter A ♠.” Anshula left a “Love You” with an infinity sign, in her comment on Arjun’s post.

Janhvi Kapoor shares a goofy video with her Aksa gang

Janhvi Kapoor took to Instagram to share a hilariously funny video dancing with her gang of friends. She captioned the video, “Aksa gang is back miss u @mahnaz_kotwal.” In the video, we get to see Janhvi pull off some crazy moves. Her video made brother Arjun come up with a hilarious comment. He wrote, “Ummm this needs a separate whole dinner to discuss,” alluding to the dinner that they had yesterday on the occasion of Father’s Day. 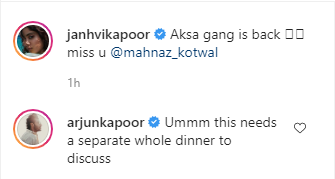