It was throwback time for some of our Bollywood celebs on social media as they shared old pictures on their Instagram handles. Rishi Kapoor’s and Neetu Kapoor’s daughter Riddhima Kapoor Sahni shared a throwback picture with Alia Bhatt and her sister Shaheen Bhatt. On the other hand, Sonam Kapoor’s sister Rhea Kapoor shared childhood photos with her siblings and parents Anil Kapoor and Sunita Kapoor.

Rhea Kapoor took to Instagram to share a bunch of throwback pictures from her childhood. Her dad Anil Kapoor, sister Sonam Kapoor, brother Harshvarrdhan Kapoor and very glamorous mom Sunita Kapoor featured in them. Rhea also revealed her fondness for princess dresses and overthinking sessions. Rhea captioned the pictures, “Always been down for a fancy dress party or a silent overthinking session in my princess dress #princessnerd #princesspartythrower #princessoverthinker #princessjasmine #forlife.” 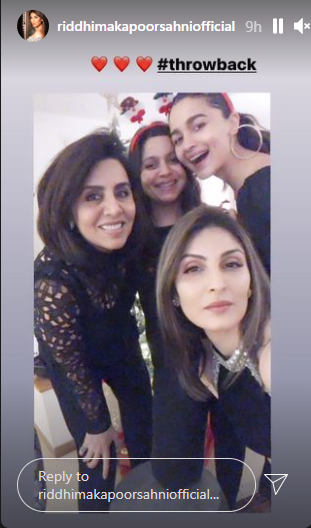 Ranbir Kapoor’s sister and Rishi’s and Neetu’s daughter Riddhima Kapoor Sahni took to Instagram to share throwback pictures with her mom, Ranbir’s girlfriend Alia and Shaheen. All four of them are wearing black and the picture was from a party. Alia on Friday had revealed that she has tested positive for COVID-19 and is under quarantine. Previous to Alia, Neetu contacted the disease during shooting Jug Jugg Jeeyo. Later Ranbir tested positive and now Alia has done so.