Union Cabinet Minister Smriti Irani is spending some substantial amount of time on Instagram while recovering from COVID-19. She has been sharing a number of Instagram stories and the latest one is an old interesting fact about F.R.I.E.N.D.S star Matthew Perry and Canadian Prime Minister Justin Trudeau.

Sharing the fact that Matthew and Trudeau were at school together and had an altercation where the former beat up the PM, she wrote, “Things you find on Insta.” Matthew, who is better known as Chandler Bing from F.R.I.E.N.D.S, apparently beat up Trudeau in school along with his best friend. 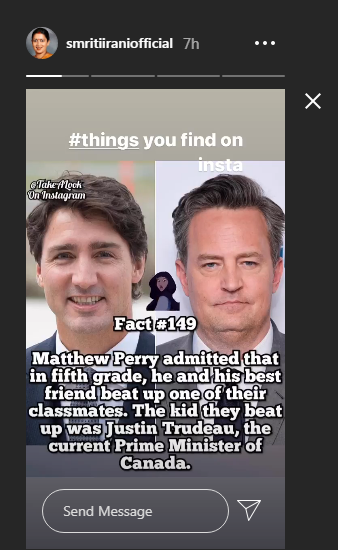 Matthew had revealed this to late-night host Jimmy Kimmel in 2017. Matthew had moved to Ottawa, Canada as a child and attended Rockcliffe Park Elementary School where Trudeau was his junior. Matthew had said, “We both beat him up. I think he was excelling in a sport that we weren't, so it was pure jealousy.” He concluded that he wasn’t bragging about beating up the PM but termed the incident ‘terrible’.

Matthew’s confession had gone viral that prompted Trudeau to challenge him for a rematch. "I've been giving it some thought, and you know what, who hasn't wanted to punch Chandler? How about a rematch @MatthewPerry?" he wrote on Twitter in April 2017. However, Matthew had declined the offer citing that the country’s army is at Trudeau’s disposal. 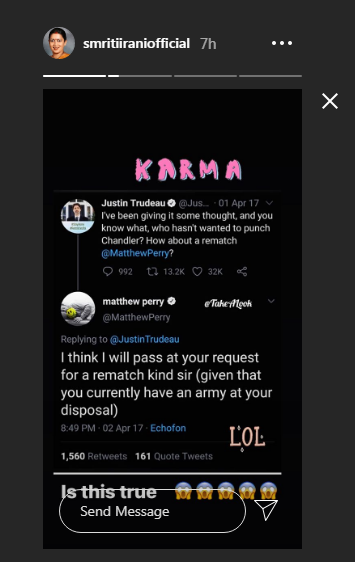 Smriti also shared a screenshot of the Twitter exchange writing, “Is this true.” Looks like Smriti will soon catch up with all the hilarious trending news while recovering from coronavirus.