Advertisement
HomeBOLLYWOODENTERTAINMENT NEWSBig movies like Sooryavanshi and Radhe will lure the audiences back: Single-screen owners urge government to reopen theatres by June 30

Big movies like Sooryavanshi and Radhe will lure the audiences back: Single-screen owners urge government to reopen theatres by June 30

The entertainment industry has been hit hard due to the COVID-19 pandemic. Owing to the shutdown, several industries including showbiz have faced a major setback. With releases postponed and pre-scheduled shoots stalled, producers and filmmakers are bearing the brunt of the losses of the investments made. But theatres, that have been shut for the past 10 weeks, have incurred most losses. Now, the Multiplex Association of India and single-screen owners dashed off a letter to the Centre and state governments, urging them to reopen theatres by June 30. The association has also intimated them of the safety measures that will be adopted in theatres across the country.

Abhimanyu Bansal, who runs Entertainment Paradise, a multiplex chain in Jaipur, said, "We are hoping that theatres will reopen between June 15 and June 30, once the government approves the guidelines submitted by the industry."

Among other rules, the theatres have proposed deep-cleaning of auditorium seats on a daily basis and temperature checks of audience. Cinema staff will have to mandatorily wear masks and gloves, and download Aarogya Setu app on their phones. Cinemas will also employ a staggered seating arrangement in the auditoriums to enable social distancing. "At the onset, we might be allowed only 50 per cent occupancy," added Abhimanyu. 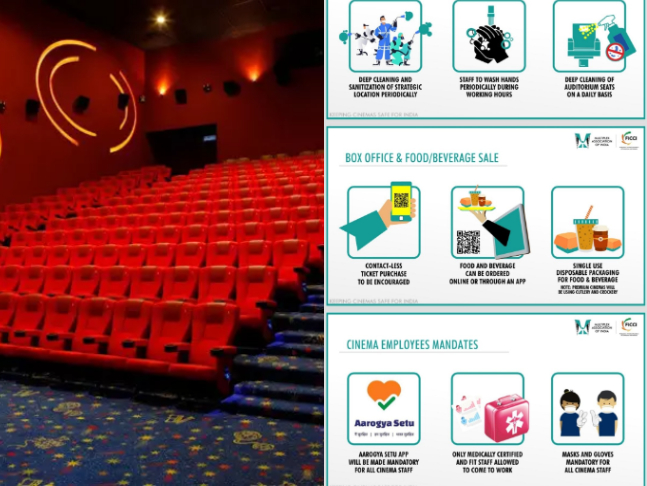 When asked if big-budget films like Akshay Kumar's Sooryavanshi will hit the theatres soon despite the drop in footfall, Abhimanyu said, "Sooryavanshi will be one of the first few films to release, but the producers may delay its release by a few weeks. They may initially want to gauge [the footfalls]. Big movies like Sooryavanshi and Radhe will lure the audiences back to the theatres," he said.

Exhibitor Akshaye Rathi, who runs 17 single screens across Maharashtra, Madhya Pradesh and Chhattisgarh, believes they can fall back on Hollywood biggies in the first few weeks, if Hindi filmmakers adopt a wait-and-watch attitude. "Tenet, Wonder Woman 1984 and Mulan are slated to release between July and August. We can also collaborate with producers and take relatively smaller films like Ali Abbas Zafar's Khaali Peeli beyond the 15 big centres."