Advertisement
HomeBOLLYWOODENTERTAINMENT NEWSThe 'A' Factor! When director Shoojit Sircar agreed to have found the perfect cast for 'Gulabo Sitabo' in Amitabh Bachchan and Ayushmann Khurrana

The 'A' Factor! When director Shoojit Sircar agreed to have found the perfect cast for 'Gulabo Sitabo' in Amitabh Bachchan and Ayushmann Khurrana

Marking a new wave in the history of cinema, Amitabh Bachchan’s and Ayushmann Khurrana’s Gulabo Sitabo is the first big-budget Hindi feature film to release on an OTT platform. The Shoojit Sircar directorial that brings together the veteran actor, Amitabh Bachchan and the rising star of the young generation Ayushmann, the quirky tale of a landlord and his tenant is much awaited. As the Amazon Prime Video's film trailer released today, it mirrors the fact that Shoojit has roped in the perfect cast to delight his audience who is perpetually hungry for great content.

Discussing how he tied together a stellar cast, Shoojit in previous interviews mentioned that while working on the script (with by the Filmfare winner writer Juhi Chaturvedi) he felt that nobody apart from Mr. Bachchan and Ayushmann can play the parts. “Juhi and I worked on this script for some time. Ronnie Lahiri, who produces the film with Sheel Kumar, Juhi, and I felt Mr. Bachchan and Ayushmann would be ideal. Mr. Bachchan was like a curious child, while Ayush was in awe of him, like everyone else in the beginning,” Shoojit told in an interview. 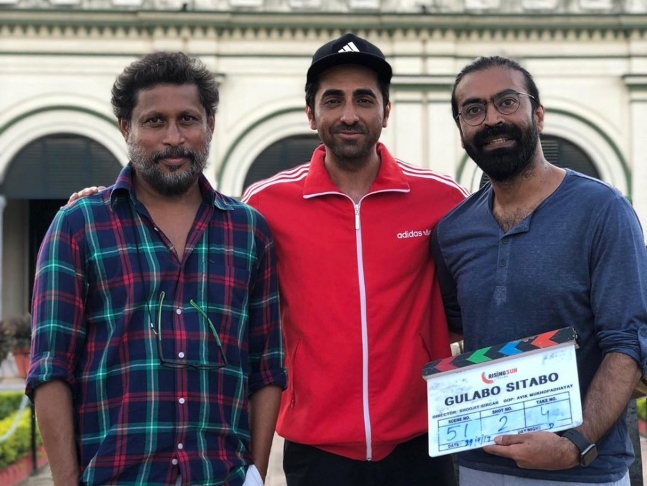 Shoojit, in a recent conversation with a leading daily, went on to call Ayushmann ‘family’ and Mr. Bachchan a ‘dear friend’. For the unaware, the filmmaker has Vicky Donor with Ayushmann and has teamed up with Mr.Bachchan for acclaimed films titled Piku and Pink. “Ayushmann is family, Mr. Bachchan has become a dear friend. We understand each other very well, our camaraderie is very good on the sets. That is what makes it most important that you enjoy the process and method. You talk, you debate,” the filmmaker shared. Talking about Mr. Bachchan’s enthusiasm on the sets of Gulabo Sitabo, Shoojit said in an interview that despite scorching summer heat and heavy prosthetics that were used to create the veteran actor’s unique look, he remained keen and most importantly believed in the filmmaker’s vision. “The shoot was planned for summer and heavy prosthetics tend to get uncomfortable for an actor, especially for facial skin. It took two hours to create the look every day and getting it off was also tedious. But Mr. Bachchan was always enthusiastic and believed in our vision,” Shoojit recalled.

Gulabo Sitabo is a quirky take on the legendary pair of puppet sisters, a part of Uttar Pradesh's folklore. The film will narrate the love-hate relationship between a tenant named Baankey and his landlord-Mirza. It is produced by Ronnie Lahiri and Sheel Kumar. Gulabo Sitabo will stream on Amazon Prime Video from June 12.