Advertisement
HomeBOLLYWOODENTERTAINMENT NEWSUnfortunately, my relationship with Salman Khan is strained now, but he groomed Arjun to get into acting, I owe him: Boney Kapoor

Producer Boney Kapoor says although he loves all his children -- Arjun, Anshula, Janhvi and Khushi Kapoor -- he never feels the need to be vocal about his parental love. Asked who his favourite child is among the four, Boney told IANS, "As a father, all my children are my favourites, but Khushi is the apple of my eyes. Woh chhoti hai na? sab se chhoti bacchi hai meri (she is the youngest, isn't it? the youngest child of mine). She (Khushi) holds a special place in my heart. Currently all the more, because she is not around. She is abroad for higher education. Having said that, Arjun is in my heart. I am not very vocal about my love for my children because I feel my love for them is natural. I am their parent, why do I have to say that I love them? Of course, I do!"

He said since childhood, Anshula was academically sharp. "She is the brightest kid of our family, and she has graduated from Columbia University. She finished her four-year course in three years. I cannot tell you how proud I am for her. When she was working in Google in the US, I wanted her to be posted here in Mumbai so that she lives here. Later, she was offered that posting by her company. She makes me proud", he said. 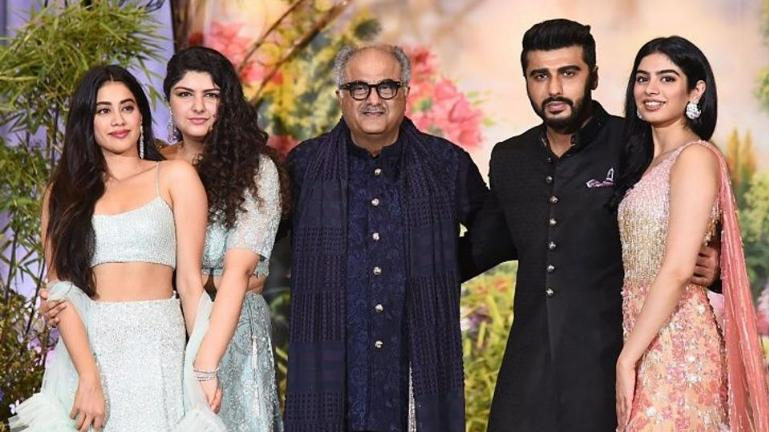 Asked how he reacts to critics' opinion on Janhvi, Boney said, "It was unfair to expect Janhvi to have the acting skill of Sridevi in her debut film. I think Jan was impressive in Dhadak, and given what she went through during the shooting of the film (referring to the sudden demise of her mother Sridevi). I give her credit that she finished the film and stayed strong during that time." The producer also mentioned he is close to his mother, and his biggest dream is to live with all his children and his mother under the same roof.

Why did he not launch his son Arjun as an actor? "Arjun always wanted to become a film director and that is why I had no plan to launch him, like a new hero. That was not our plan at all. But one day, I got a call from Salman saying Arjun should try his hand in acting because he has all the elements to become one. So, Salman took Arjun under his wings and groomed him. Unfortunately, my relationship with Salman is strained now, but initially, Salman encouraged Arjun to get into acting. I owe this to Salman."