National Award-winning actor Ayushmann Khurrana, who is fast emerging as Bollywood's poster boy of new-age content-driven cinema, is all set return with another film that defies formula. The trailer of his next film Shubh Mangal Zyada Saavdhan has received a big thumbs up from fans. Now ahead of the film's release on February 21, the Central Board of Film Certification (CBFC) has certified Shubh Mangal Zyada Saavdhan with U/A.

Sharing the same, Colour Yellow Productions posted a picture of the film's cast holding the certificate. They captioned it as  "CBFC ne jeetaya pyaar! Dekhiye #ShubhMangalZyadaSaavdhan seh-parivaar, releasing this Friday! 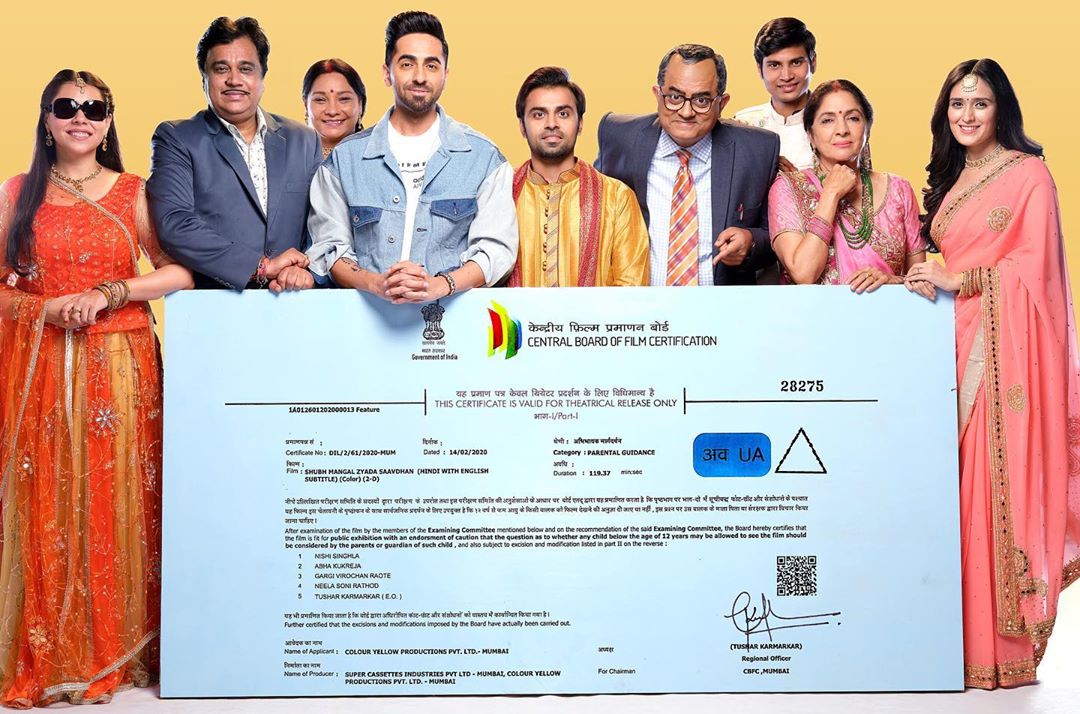 Directed by Hitesh Kewalya and produced by Aanand L. Rai, Bhushan Kumar, Himanshu Sharma and Krishan Kumar under their banners Colour Yellow Productions and T-Series, the film also features Ayushmann's on screen Badhaai Ho parents Neena Gupta and Gajraj Rao apart from seeing Jitendra Kumar's as the lead actor's gay lover. Talking about the film, Ayushmann had earlier told a news agency that many people from the industry told him to rethink playing a gay man on screen. "Their (family's) confidence in me and my dreams has made me who I'm today, has made me what I stand for and I can't thank them enough. Doing 'Shubh Mangal Zyada Saavdhan' was one of the most important decisions of my life. A lot of people from the industry asked me to re-think this because no leading hero has ever portrayed a gay man on screen. But I knew, this stereotype needed to be shattered and the time to change it, is now. I somehow knew I had to do it and take the plunge," he had said.

'We shall overcome,' say Ranveer Singh and Deepika Padukone as they pl