There ain't a doubt that Alia Bhatt is amongst the actresses who manages to make headlines for the right reason. Be it her professional commitments or personal life, the 26-year-old rightfully wins hearts of all. Now, a couple of days after Alia shared the first posters of her upcoming film, Gangubai Kathiawadi, pictures of her doing the rounds of a clinic surfaced. As her fans wondered, Alia shared a picture with her cat-Eddie informing all about her back injury. Soon after, certain reports stated that the Raazi actress was hurt while shooting for the Sanjay Leela Bhansali directorial.

As the reports went viral across media, Alia, on her Instagram stories, issued a clarification statement. The actress, in the note, dismissed the rumours and said an old injury has resurfaced which is causing the trouble. She further requested to not spread false news. Adding, Alia said after taking proper rest at home, she will be resuming the shoot from today. Concluding the statement, she thanked her well-wishers for their concern. 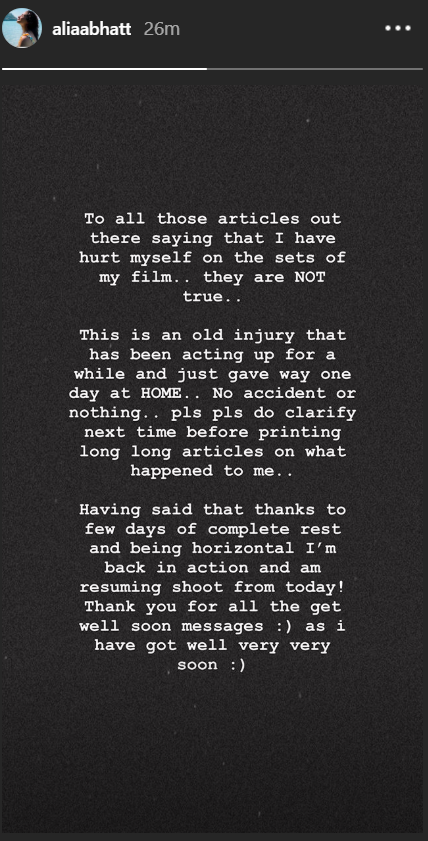 Speaking of Gangubai Kathiawadi, Alia will be seen in the titular role of the film which is based on a brothel madam from the red light area, Kamathipura in Mumbai. Gangubai is said to have changed the face of the region and is one of the most remembered women from the history of Mumbai. She is believed to have been pushed into prostitution at a very young age and became the most influential pimp, having served several renowned criminals from the city. Gangubai Kathiawadi will be directed by Sanjay, who will also co-produce the film with Jayantilal Gada of Pen India Ltd. It will release on September 11, 2020.