Ajay Devgn’s trailer of ‘Tanhaji: The Unsung Warrior’ is soul-stirring!

In a fierce period war drama to beat all period war dramas before and after it, Bollywood superstar Ajay Devgn is valorously riding to the screen in early 2020 as Tanhaji: The Unsung Warrior. The trailer of this biographical produced by Ajay Devgn Ffilms and T-Series was just launched with much fanfare by the actor and Bollywood’s action director Rohit Shetty.

Tanhaji Malusare was the military leader of Chhatrapati Shivaji Maharaj’s Maratha empire. He famously fought the Battle of Sinhagad in 1670 to recapture Kondhana Fort near Pune from Mughal possession. Tanhaji led a bloody battle from the front. At the end, the fort was conquered, but Tanhaji was grievously wounded and died fighting on the battlefield. Grief-stricken, Shivaji said, “Gad ala, pan sinha gela.”  Which meant, “We got the fort, but lost the lion.”

Recommended Read: He was my first choice even before I’d locked the script: Director Om Raut on casting Ajay Devgn in 'Tanhaji: The Unsung Warrior'

It is this lion heart Maratha warrior who has been lost in the pages of history that Ajay has resurrected and given a place of pride in people’s minds and hearts. His Tanhaji is shown to be a kind and compassionate family man who unsheathes the sword and bravely takes to battle at the behest of his master, Chhatrapati Shivaji Maharaj. Ajay slips into the armour of the Maratha warrior with the same ease as he wears khaki for his cop role in the Singham series. Here is a consummate actor for whom any kind of action is second nature.

The scale of Tanhaji: The Unsung Warrior is as majestic as it is impressive. Shot by director Om Raut in 3D, the biographical will bring the Battle of Sinhagad into the auditorium and make audiences flinch and recoil in awe and wonder amidst bloody swordfights on the battlefield and flying arrows on the ramparts of the fort while massive cannons boom and elephants and horses trample around among the wounded and dying. The action scenes here are unlike any in the Bollywood epics of the recent past. The warfare is one of cunning and daredevilry fought Maratha style. Music by Ajay-Atul and cinematography by Keiko Nakahara are of the soul-stirring and heart-thumping variety. But that’s what you need in a war. 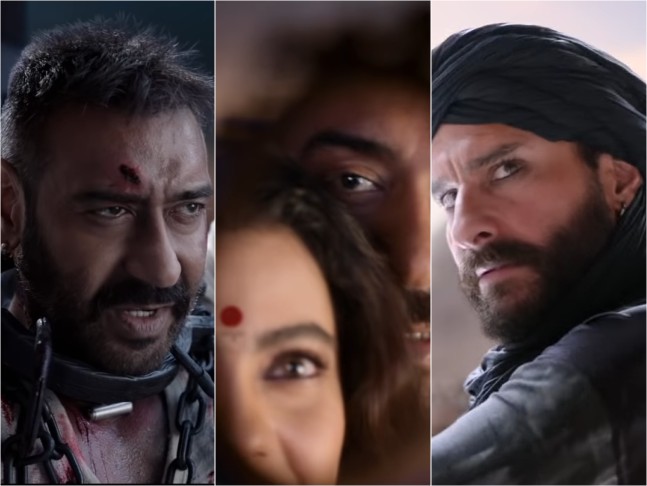 It’s a crisp and tremendous trailer. Ajay Devgn, in his 100th film, is the life and soul of Subedar Tanhaji Malusare. Saif Ali Khan as Udaybhan Rathod, the Rajput officer appointed by the Mughals to defend Sinhagad Fort, is suavity and menace. And Kajol as Saavitribai Malusare, the woman behind Tanhaji’s incredible courage and phenomenal strength, is wonderfully cast and uses her Maharashtrian lineage to slip into the role of the warrior’s wife effortlessly. The trailer is out today. You will have difficulty making up your mind after it whether you like Ajay Devgn better as Bajirao Singham or Tanhaji Malusare.