Bollywood superstar Akshay Kumar was on top of the Score Trends India popularity charts.  Versatile actress  Bhumi Pednekar also hit the bull’s eye with her critical performance in the actress Top Charts. These statistics are authenticated and researched by the US-based media tech Score Trends India. Post the success of Mission Mangal and Housefull 4 which is inching towards the 200 crore mark this Khiladi Kumar has been on a high with 88 points with number one position followed by King Khan, Shah Rukh with 69 points on the second position. Shah Rukh's TED Talk show and buzz towards his birthday which put speculations about his film announcements took the actor to the second position on the charts.

Bhumi Pednekar too is at the top position with 53 points followed by her co-star of Sandh Ki Aankh Tapsee Pannu with 47 points in second position. Bollywood ’s megastar Amitabh Bachchan’s on the third position with his popular game show Kaun Banega Crorepati (KBC) and surprisingly Salman Khan who is talk of town with his next release Dabanng 3 and announcement of  Radhe is on the fourth position. The Bigg Boss season 13 seems to have not helped this actor. On the other hand, the third position is acquired by Anushka Sharma whose pictures with her hubby cricketer Virat Kohli has kept her trending on various social platforms and viral news section and The Sky is Pink for this International icon Priyanka Chopra Jonas who stands tall on the fourth position post her critical performance in this high octane emotional film. 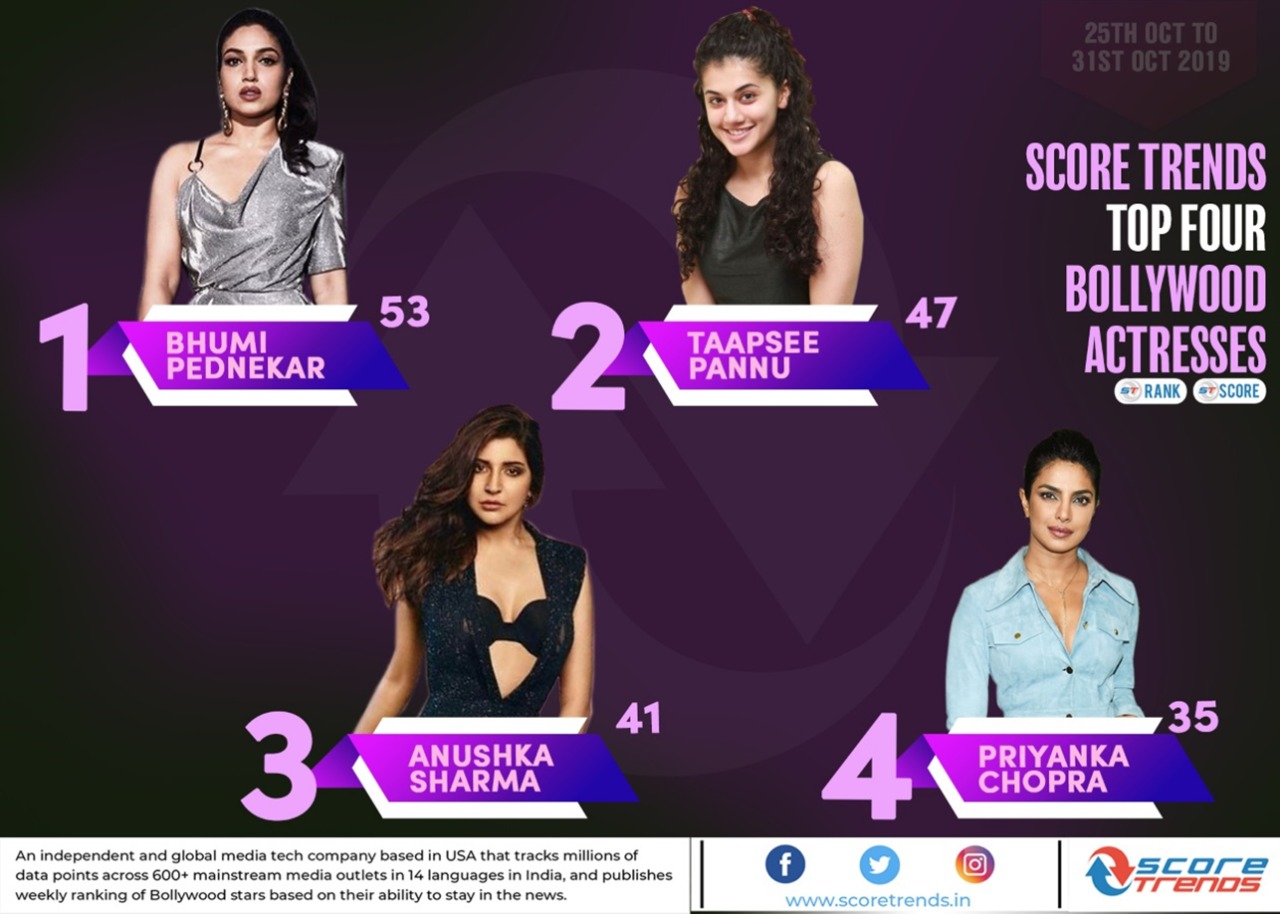 “What worked in Akshay's favour is his soaring popularity on social media platforms and news portals post the release of Housefull 4 followed by his film announcements and endorsements. Both Bhumi and Tapsee’s outstanding performances in Sandh Ki Aankh has got them neck to neck on top of the charts. The Viral News, newsprint and social platforms has hit the bull's eye for the two talented actresses, “revealed Ashwani Kaul, co-founder of Score Trends India.

Kaul further elaborated, “We collect data from over 600 news sources across 14 languages in India to analyse the media. These include Facebook, Twitter, print publications, viral news on social media, broadcast and digital platforms. Various sophisticated algorithms then help us to process this massive amount of data and arrive at the scores and rankings of celebrities.”