Advertisement
HomeBOLLYWOODENTERTAINMENT NEWSThere was no misuse of sexuality in our commune: Ma Anand Sheela talks about Osho and life in Rajneeshpuram during her interaction with Karan Johar

There was no misuse of sexuality in our commune: Ma Anand Sheela talks about Osho and life in Rajneeshpuram during her interaction with Karan Johar

Ma Anand Sheela, secretary of the late godman Bhagwan Rajneesh, popularly known as Osho, is in India. She was the personal secretary of Bhagwan Rajneesh from 1980 to 1985. She is credited with the creation of the Rajneesh Commune and Rajneeshpuram. She recently returned in the limelight thanks to the award-winning Netflix series Wild Wild Country, which narrated the true story of the controversial late Osho -- the Rolls-Royce–driving Indian guru who set up an alleged sex cult in central Oregon in the 1980s.

During her rare visit to India after 34 years, she interacted with filmmaker Karan Johar as part of a talk organized by NGO Humans for Humanity and Sipping Thoughts. And Ma Anand Sheela claimed that contrary to popular perception, sexuality was never misused in both of Bhagwan's communes -- Pune and Rajneeshpuram. "There was no misuse of sexuality in our commune in Pune or in Rajneeshpuram. We talked about sexuality openly. It's like when you are attracted to somebody, you express your attraction," as reported by a leading news agency.

Interviewing #maanandsheela was an experience! She is fun forthright and fabulous! Dodging every answer in her inimitable fashion! She is controversial without revealing a thing! Now that’s an art! She is witty and never at a wits end! Thanks for the help @shakunbatra

RECOMMENDED READ: Ma Anand Sheela to be in India, to converse with Karan Johar

When asked whether she had unrequited love for Rajneesh, she said the guru was "also very much in love with me" and added, "... You should see some of the photographs and see how he looked at me. And the way he said 'Seela'..." Further sharing an anecdote how she once watched the classic Umrao Jaan with Osho once, Sheela revealed, "There was a poetry on love in it. We finished our work and then Bhagwan said, 'Seela, come sit here'. I sat with him and he explained every word of that poetry to me. It was divine." On being prodded about the nature of their relationship, she quipped, "There was no sex with Osho. Our relationship was not sexual. The integrity mattered because I was already drowning in him..." 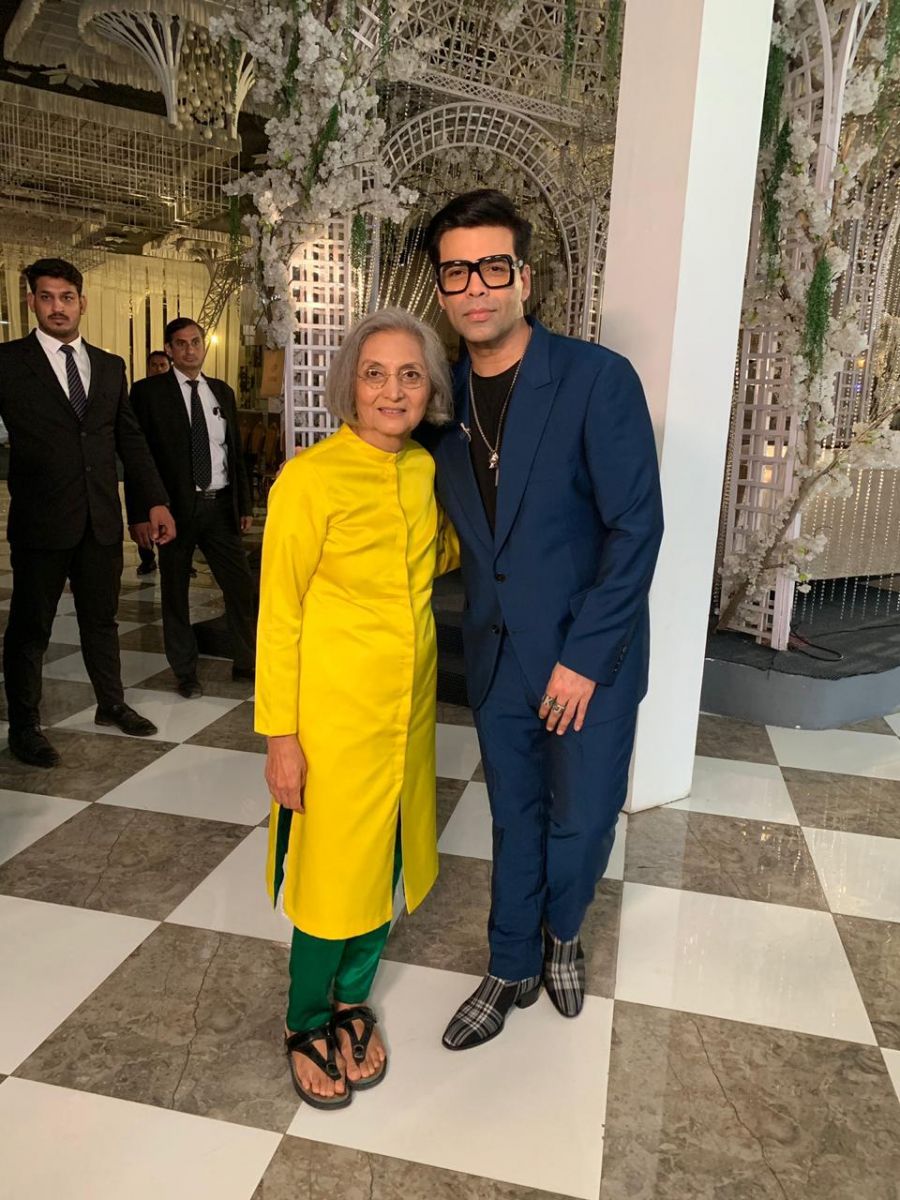 In 1986, after a fallout with Osho, Sheela pleaded guilty to attempted murder and assault for her role in the 1984 Rajneeshee bioterror attack. She was sentenced to 20 years and paroled after 39 months and moved to Switzerland. However, she has no regrets in life. "I have given my full devotion to whatever I did," she added by saying, "One message that I want to give to everyone present here is to be yourself; I am me and will always remain like this. I have learnt to live communal lifestyle from Bhagwan Rajneesh."

Last but not the least, Ma Anand Sheela gifted Karan a box of Swiss chocolates and told him, "These are the best Swiss chocolates, Karan, and they taste even better after sex." Not to forget, she shared an incident where she married one of her husbands because of losing a bet. To which KJo instantly replied, "You are like Salman Khan. Woh bhi ek baar commitment kar de toh apni bhi nahin sunta."

The NGO's next event with Ma Sheela is on October 2. She is in India till October 25.

50 years of impeccable fashion! Jean-Paul Gaultier bids adieu to the industry with a final bow at the Paris Fashion Week