Sara Ali Khan, who has enthralled the nation with her beauty and talent through her films, has successfully won the hearts of the audience and critics alike since the beginning of her Bollywood career and why not. The actress has had her own journey and with her efforts, she has carved a niche for herself in B-Town. Not just impressing fans with her talent but Sara has also managed to become a source of inspiration to several with her drastic weight loss. Although, her transformation story isn't unknown, but what you shall see now, will surely leave you spellbound.

The Simmba actress, on her Instagram account, shared a throwback picture with her mother Amrita Singh and the post was something that had our jaws drop out of admiration. Sara, then weighing a whopping 96kg, twinned with her mother in black. She captioned the image as, "Throw to when I couldn’t be thrown #beautyinblack".

Throw to when I couldn’t be thrown #beautyinblack

Recommended Read: When Kartik Aaryan came up with a solution to keep Sara Ali Khan's sugar cravings under control

Soon after the post was shared, Sara's alleged boyfriend Kartik Aaryan made it to the comments section to send across a hilarious reply. For the unversed, Sara and Kartik, who are rumoured to be dating each other, will be sharing the screen space in Imtiaz Ali's untitled film which is the sequel of Love Aaj Kal.

The actress' fans weren't much behind in making their admiration visible. With some calling her an inspiration to some tagging her as the perfect ambassador for Fit India Movement, Sara received a thumbs up for coming out with this picture of hers. 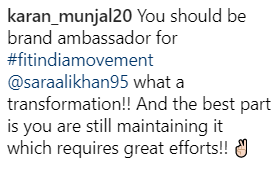 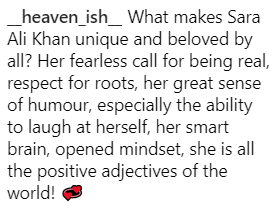 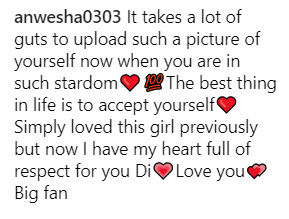