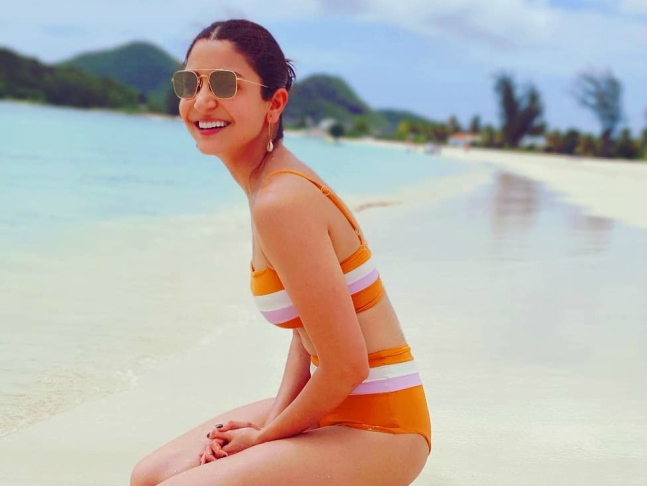 Anushka Sharma recently posted on her Instagram profile a photo of her wearing an orange bikini in the Caribbean sun and her husband Virat Kohli could not stop gushing over it.

Anushka looked quite dazzling in the bikini and added sunshine to the picture. She was seen sitting on the beach with her hair pulled back into a bun in this sun-kissed picture. She looked even prettier with golden sunglasses and hoop earrings. After seeing this picture, Virat was lovestruck too. He poured his heart out in the comments and left love emojis on her post.

On holidaying in the Carribean Islands the actress said, "I needed to take two months off. I told my team I don’t even want to read anything right now. It's important as a creative person to take time off but you deny yourself that. Of course, there’s pressure. You’re constantly asked, Kaunsi film sign kar rahe ho?"

The couple was together in the Carribean Islands as Virat Kohli is busy leading the Indian team in the series against West Indies. While her husband is training hard with the team, Anushka spent me-time with herself at the exotic Carribean Islands. She is often seen posting pictures of her vacation along with pictures of hubby Virat on her social media handles.

On the work front, the actress was last seen in Zero alongside Shah Rukh Khan and Katrina Kaif. When Anushka was asked why she hasn’t been signed up for anything post-Zero, she responded by saying, “That’s a conscious decision. I wanted to take a couple of months off after Zero. After I got married, it was like a whirlwind. I was back on the sets shooting for Sui Dhaaga: Made In India and later Zero. I was just working back to back. Whatever time I’d get, I'd try to balance and meet Virat. But I was feeling too worked up."