Shweta Bachchan Nanda, the eldest daughter of actors Amitabh Bachchan and Jaya Bachchan has been making the right noise across media, all thanks to the amazing work she has been putting across on the field of fashion and literature. Be it her outings with BFFs Karan Johar to making a debut on his show Koffee With Karan in the sixth season, Shweta has managed to grab the limelight with grace and dignity. Now, the pretty lady has once again made it to the headlines after a couple of pictures from her wedding were shared by the renowned designer duo Abu Jani and Sandeep Khosla on Instagram on Sunday. These pictures belong to the year 1997.

Amongst several beautiful pictures, one was from the time when Shweta was pregnant with her firstborn, daughter Navya Naveli Nanda. While sharing the picture, the designer duo not just gave a detailed explanation of what went behind making the outfit but also informed that the picture was taken four days before she gave birth to Navya. Soon after reading this, Navya, like an excited daughter, couldn't hold back her emotions and wrote, 'OMG'. In response to her comment, Shweta said, "Ya, four days later". 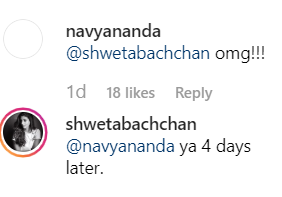 Shweta tied the knot with Nikhil Nanda, the nephew of Rishi Kapoor and Randhir Kapoor in 1997. The couple became parents to Navya in the same year and Agastya in 2000. Coming to the mother-daughter duo, Shweta and Navya, recently took a vacation to Japan. Addressing the much-speculated film debut of Navya, Shweta, during her appearance on Koffee With Karan Season 6, denied the rumour and said she isn't interested in foraying into cinema.

Janhvi Kapoor associates with Fankind, invites fans to ride with her i