PeepingMoon had informed its readers on Monday that veteran actor Amitabh Bachchan had signed Shoojit Sircar’s next film. The project is said to be inspired by a real story and will have one more young male actor besides Mr. Bachchan. In talks for the role was Ayushmann Khurrana. Now, Shoojit himself has confirmed the news to a leading daily. Amitabh and Ayushmann, for the very first time, are joining hands for his next and it is titled Gulabo Sitabo.

The film is written by Juhi Chaturvedi, who had penned the actors’ previous collaborations with Shoojit, as also the Varun Dhawan and Banita Sandhu-starrer October. The Ronnie Lahiri and Sheel Kumar production go on the floors next month. “Juhi and I have been working on this script for a while now. We all know whenever she comes up with a story, it has her trademark quirk. As soon as I read it, I shared it with Mr Bachchan and Ayushmann at the same time. I thought it would take some time to develop and take it forward, but everyone was so enthusiastic to work on this script, they figured out their dates and here we are, planning to release the film this year itself,” Shoojit told the daily.

Ayushmann shared a picture with Shoojit and mentioned about being excited about this new journey.

@amitabhbachchan sir aur meri Jodi, ekdum #GulaboSitabo si hogi Really excited to be a part of this project by my mentor @shoojitsircar! In cinemas this November. @juhic3 @ronnie.lahiri @filmsrisingsun #SheelKumar 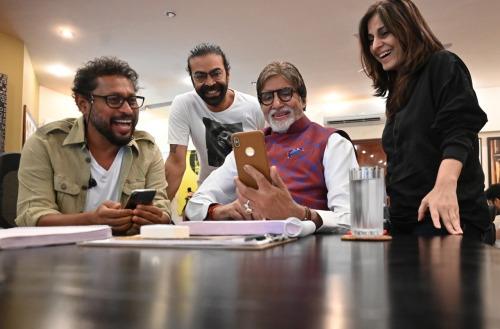 When asked about the origin of the film’s title, the director informed that it is a colloquial term used in the Uttar Pradesh Capital. “Regarding its association with the story… you will have to wait and watch the film to know more,” he added.

It was my heart’s desire to compose a remixed version of the song: B