Advertisement
HomeTELEVISION NEWSTELLY BUZZ‘It has been my dream to be a dad, always wanted a girl and told Ruchikaa so,’ says Shaheer Sheikh on becoming a father

‘It has been my dream to be a dad, always wanted a girl and told Ruchikaa so,’ says Shaheer Sheikh on becoming a father

Shaheer Sheikh, who welcomed his baby girl on September 10 with wife Ruchikaa Kapoor has opened up about fatherhood and said that it was always his dream to become a father. Talking to a leading daily, Shaheer said, “Being a parent is a big responsibility. It has been my dream to be a dad. I always wanted a girl and told Ruchikaa so, whenever she asked.”

Shaheer further revealed that among his group of friends he is the “responsible one” at every party and has always been called the Principal by them. He said, “I will be the one to remind people not to be too loud or don’t do this. My friends tease me. I was excited to know (about the pregnancy) as I have always loved kids. I have three nieces and one nephew and I have taken care of them for months, some from the day they were born. It is just so amazing. I can be myself when I am around kids. I don’t know why but many guys don’t feel or express these feelings. Childbirth is the biggest miracle on earth. It is the most beautiful process. When you feel the kick, it is just so wonderful. Women are looked after during pregnancies, and rightly so as they go through so much, but the men, too, should get some attention as a father goes through a lot emotionally as well. In India, men are supposed to be strong, not supposed to share or have emotions. I am not that kind of person and express myself.” 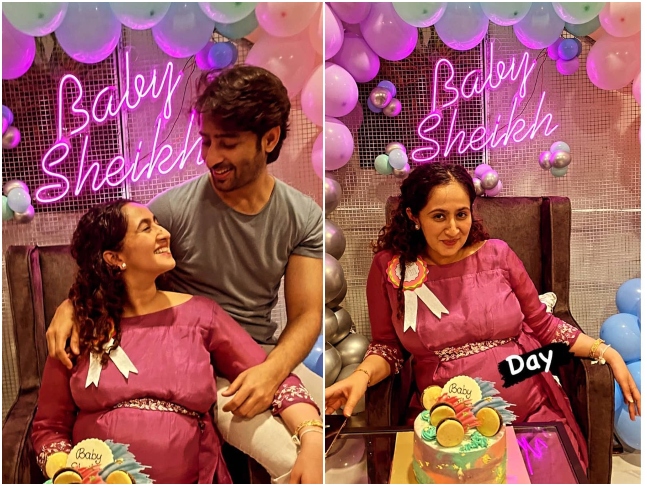 However, the actor maintained that he does not yet know what kind of a father he would be- a disciplinarian or a soft-hearted one. Shaheer said, “I might spoil my child. But I also know that I will never force my thoughts or views on my child.” He further revealed about a question he was asked during a modeling pageant and said, “I was asked, ‘what would you do if you wake up as a woman one day?’. I replied, ‘I would love to be pregnant’. That answer came spontaneously without hesitation! Man’s biggest limitation is that he can never give birth to a child. It is a superpower that only women have. Women are stronger than men to deal with childbirth physically and emotionally.”

Shaheer has two shows in his kitty, Kuch Rang Pyaar Ke Aise Bhi-Nayi Kahaani  and Pavitra Rishta and has been shooting for them at a breakneck speed due to which he could not spend as much time as he wanted with Ruchikaa. However, now the actor wants to take a paternity leave and be with his newborn daughter. He said, “The plan was not to do anything a few months before and after the delivery but due to the lockdown, projects got pushed and I had to shoot for two shows simultaneously. In the first trimester, I was at home and I tried to spend as much time as possible at home.”

Sidharth Shukla's family members request people to respect actor's consent and take their permission before releasing his projects; here's why

Nawazuddin Siddiqui builds his dream house in Mumbai, names it 'Nawab' after his late father