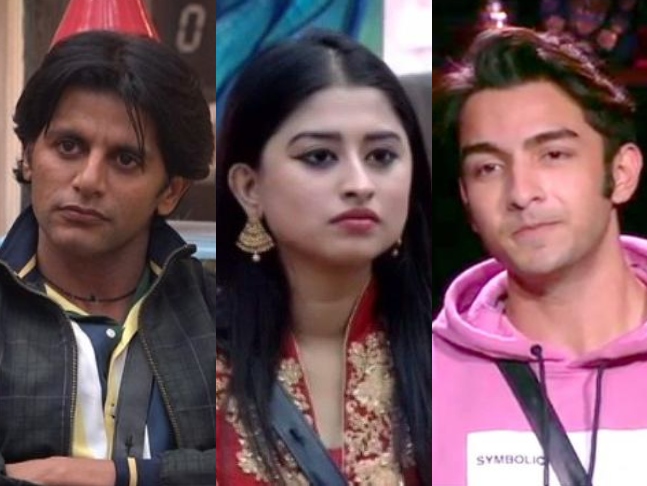 Peace from the house is gone again. Looks like now everyone is just trying to step over each other. As the Jinn continued to be mean housemates' equation came under the scanner.

The housemates woke up to the song Hanikarak. The morning began with an argument between Surbhi and Romil as he was caught sleeping by Bigg Boss and the “cukdkoo” sound played. Surbhi got angry as Romil refused to accept the same. Sree is called in the guffa. The Jinn asked him to ask Surbhi to destroy all the tissues on which she wrote notes for people. Sree said he will not ask her and wanted to get nominated. The Jinn asked him to go and inform Surbhi as a part of the protocol. Sree told this to her and asked her to not sacrifice. Dipika said that he had also done things for her and it’s fair for Surbhi to make that sacrifice. Surbhi goes in and finally dips all the tissues in the tub of water with colours.

Surbhi told KV that Bhuvneshwari had called her ungrateful and she did this to prove that she is not. Sree came out and thanked her and said that what she did a fan would do the same. Later in the living area, he thanked her once again and said that he was proud of his fan. Surbhi said that whatever happened between the two was only out of anger and nothing changed her admiration for her favourite player.

Romil and Sree got into an argument and Romil said he will not even let him sniff the trophy. Sree told him that he was doing this to grab footage and accuses other of doing that. Sree made a passing comment on what his wife said. Later Romil told Deepak that Sree was smart to make the comment on his wife and that no matter how badly they have fought he never spoke about his family.

Next was Romil to enter the guffa and the Jinn asked him to ask Somi to crush all her family pictures. With a heavy heart, Somi did that and saved Romil. Dipika was the next to enter the guffa and the Jinn asked her to as Sree to shred his family pictures. Dipika told this to him and asked him to think. Sree ridged inside to get the pics and said he would do anything for KV and Dipika. Dipika was saved and she came out crying and apologised to him. Sree said that it was not her fault and she too is his family.

Post the nominations Rohit and Deepak were caught sleeping and Bigg Boss called everyone in the living room and rebuked them. He said that at this stage either people would be working hard to prove their mettle or get actively involved in the show but looked like these were too overconfident. He pointed to Romil and Rohit often breaking the rule. Bigg Boss then asked Surbhi to keep eight mattresses in the storeroom. Surbhi decided on Romil, Deepak and told KV that his mattress would be saved only if Rohit and Deepak won’t sleep on it. She asked Dipika to share her bed with Somi and Dipika said that she can take the mattress if she wants but she would sleep on her bed. An argument broke between the two and Sree also got involved in the same. Dipika said that she would not share the bed and Surbhi was free to take try mattress but was no one to tell her what to do. Everyone’s temperament flared up and Surbhi asked Sree to stay away. She warned Dipika to talk to her with respect. Sree told Dipika that they did that on purpose. As the mattresses were sent Dipika and Sree spoke about what happened. Sree told her that they were in revenge mode and hence did all that and advised her to not stoop. KV and Surbhi also had a chat and KV told her that she did not do anything wrong and that Dipika overreacted.

KV read out the luxury budget task and Bigg Boss said that since people didn’t follow the pause order properly the luxury budget task had been cancelled. However, he did give them all a chance to win the luxury budget again. There was a cook-off task wherein there were two teams. Dipika and Somi were the head of the team. Sree and Romil were cooks in Somi’s team and Deepak and Rohit were cook’s were in Dipika‘ team. The two chefs would guide their cooks to make Chinese dishes which would be tasted by KV and Surbhi. The duo will decide on three names who would share the luxury budget. As all of them gear up KV and Surbhi decide to play fair.

Dipika’s team made noodles and Chilly Paneer and Somi’s team made fried rice. Though Surbhi and KV loved the taste of what Somi and her cooks had made KV said that the rice was a little sticky. Sree did not like this. The judges were impressed with Dipika’s team and declared them the winner. Dipika said that she would like to share her hamper with her cooks and Sree. Sree was upset and said that he does not want anything without his team. Dipika then chose Somi. Sree was upset about his defeat and started acting weird. He started returning Dipika’s things and she asked kept asking him what was wrong.  Sree said that everything was fine and asked her to not read too much. Sree said that he reacted like this whenever he lost. Dipika said it was not her fault. Dipika got upset and said that she didn’t like that he had dinner without her. Sree asked her to go to others. Dipika broke down and said that he says that to her always. She broke down and said she won’t trouble him any more. She went into the bathroom and cried. Sree went an after her. She came out of the bathroom and saw through Sree.

Later Sree was crying for some reason near the door and KV, Deepak and Dipika cheered him up. With this, the show came to an end.

The preview showed an interesting task wherein Dipika and Deepak were questioned on the qualities of the housemates. This ruffled a lot of feathers and Romil came at the receiving end. Somi, Rohit and KV are nominated for the week, who do you think will be eliminated this week? Leave your answers below and keep reading this space for more.